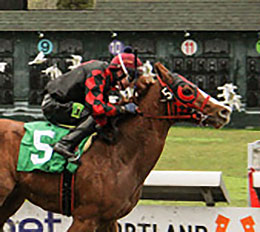 Ridden by jockey Oscar Cervantes, L Bar D Razle Dazle covered the 350 yards in :17.095 seconds, into a 5 mph crosswind, to establish the new track record while earning a 115 speed index. The son of Ragazzo smashed the previous record of :17.320 seconds set June 19, 2010 by Snip N Dale.

Juan Sanguino conditions the 4-year-old for owner Edwin Garcia. Bred in Oregon by Darrell and Linda Sanders, L Bar D Razle Dazle has compiled a (24) 7-6-3 record and today's winner's purse valued at $7,700 brings his total earning to nearly $70,000. The sorrel gelding is out of Dash Home Deb by Strawfly Special.

Also a multiple stakes winner, Corona B Gone finished a nose back in third for owner Ruben Magallanes and trainer Hector Magallanes. Jake Samuels had the riding call on the Favorite Cartel 4-year-old out of Go Girl Gone by Shazoom .Michael and Shannon McKay bred the $73,067 earner in Oregon.

The application was approved by the Oregon Racing Commission in March, and the company signed a 50-year lease agreement with Josephine County in August for use of Grants Pass Downs, formally marking an epicenter shift for horse racing in Oregon.

Significant upgrades to the track and facility have been completed at Grants Pass Downs in advance of the meet.

Races will be held every Sunday and Monday through Nov. 4, with 14 race days scheduled in total for the meet and all post times at 1 p.m. Admission is $4, and parking is free.