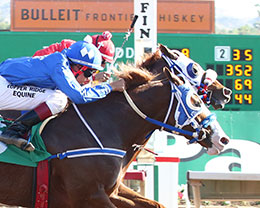 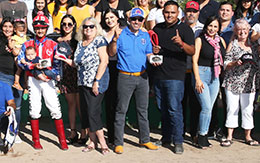 Unrestrained is undefeated in four starts at Turf Paradise, including the AQRA Presidents Open Spring Derby in April, and is a multiple stakes winner. He is now eight for 14 lifetime with career earnings of $88,123.

Rigoberto Guillen owns and trains the 3-year-old gelding, who was bred in California by Ed Allred. He is by Kiddy Up, out of the Check Him Out mare Thinking Out Loud.

Moonflash Deluxe and Luis Valenzuela were gaining on the winner and were outnodded at the wire but finished three-quarters of a length ahead of One Famous Icon.

Moonflash Deluxe is still a maiden after ten career starts but has four second-place finishes; this was his best effort to date in several stakes appearances. The First Moonflash gelding is trained by Jose Botello for owner Yuriana Ramirez. He was bred in Louisiana by Grant Farms, LLC, out of multiple graded stakes placed mare Corona Deluxe, by Corona Cartel.

One Famous Icon was third in the final; he was the fifth fastest qualifier after finishing second in the other trial. The colt was ridden by Mark Jasso for trainer Rigoberto Guillen and owner Yuriana Ramirez.

One Famous Icon was bred in Texas by Johnny Trotter, by Mr Jess Perry and out of One Famous Lady, by Chicks Beduino.