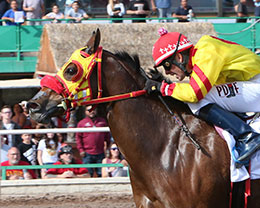 PHOENIX, AZNOVEMBER 3, 2019Streakin Seis Corona held on to win a rough edition of the $10,000 Wayne Brasher Memorial Stakes (not black-type) at Turf Paradise on Sunday, the third of four stakes on the card.

The 250-yard race for 3-year-olds and up resulted in the disqualification of two horses, including post-time favorite Be Quiet.

Streakin Seis Corona was ridden by Michael Ybarra for owner and trainer Havid Canez. The 4-year-old gelding was bred in Oklahoma by Terry and Irene Stennett, by Tres Seis and out of the Corona Cartel mare Streakin Cash Corona.

Streakin Seis Corona is now four for nine lifetime with wins at Turf Paradise, Arizona Downs and Lone Star, and has earned $48,590 to date.

Streakin Pr and Aaron Belloc were placed second in the race; Jose Mendoza owns and Angel Hernandez Dominguez trains the 6-year-old son of Corona Cartel. He was bred in Oklahoma by Pine Ridge Farm LLC, out of Bonnie Streakin, by Streakin La Jolla.

Streakin Pr is a stakes winner and multiple stakes placed with seven career wins in 21 starts and lifetime earnings of $196,307. He won the Valley Junction Futurity at Prairie Meadows in 2015 and is stakes placed at Remington and Canterbury.

Dog Choice and Martin Osuna were up for third for trainer Roy Ronquillo. Ariana Garcia owns and bred the gelding in Arizona, by Dog Daze Afternoon, out of Tiny Wood Choice, by A Regal Choice.