Ridden by Eddie Garcia for trainer John Cooper, the Favorite Cartel gelding covered the 400 yards in :19.832. Chickititas Favorite, who entered this race after winning his Golden State Million trials, earned $16,500 for the win.

The California homebred, out of Chickitita by Tac It Like a Man, has won three of eight starts this season. Also a finalist in the Robert Adair Kindergarten Futurity(G2) earlier this year, Chickititas Favorite has earned $46,095. 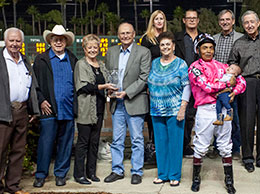 Bobby D. Cox's Texas homebred Ratification finished a nose back in third to earn $3,750. Jaime H. Gomez conditions the daughter of leading sire Apollitical Jess from the First Down Dash mare Shesa First Ratify. A finalist in the Rainbow Futurity(G1) at Ruidoso Downs in July, Ratification has banked $53,338 this year.