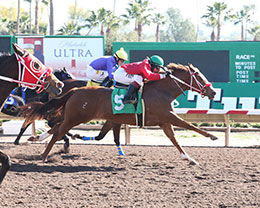 The ten fastest qualifiers will return to the Phoenix, Arizona raceway on Sunday, January 26th to vie for the winners share of a $5,000-added purse going 300 yards.

Under jockey Kassie Guglielmino, Scandalous Dasher broke in at the start before taking the lead and finishing the 300 yards in :16.620 seconds, equaling a 92-speed index. It was the first career win in five starts for the daughter of all-time leadings sire First Down Dash.

John M. Allred trains the sorrel filly for himself and Mary Allred. Bred in California by John Andreini, from the Mr Jess Perry mare One Famous Ermana, Scandalous Dasher was winless at 2, however she qualified for the AQHRA Presidents Fall Futurity and the Granite Mountain QH Futurity. She has earned $3,931.

Jake Samuels had the riding call aboard stablemate Apollitical Run who held on for the second fastest clocking of :15.646 seconds. Allred trains the daughter of multiple stakes sire Freighttrain B for owner Scott McDaniel.

Rancho El Cabresto Inc. bred the bay filly in California from the One Famous Eagle mare Oneapollitical Flight. He has compiled a (5) 0-2-1 record and banked $2,233.

Pcr Flashin The Cash was a head winner over I Roll Like That in the opening trial to record the third fastest time of :15.670 seconds, a 91-speed index for owner-breeder Greg Torgerson.

Jesus Torres-Casas trains the Utah homebred son of a leading second-crop sire Five Bar Cartel from the Separatist mare Classy Sassy Anna. The gray colt ridden by jockey Jake Samuels has one win in six career starts and has earned $2,698.