Home > Racing>John Carter Cash Gets The Money In Dillingham Handicap 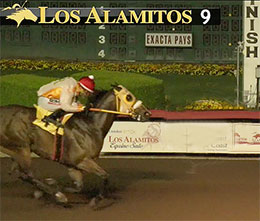 With Jose Nicasio in the irons, John Carter Cash rocketed out of post number four and never looked back on the way to a length victory in a 400-yard time of :19.677. The gelding by Carters Cartel was picking up his fourth win in 12 career starts.

The first time I ran him, he just had a bad start, Zamudio said. He made up ground late and just barely missed winning by a nose. We did a few things with him after he came to my barn. We tried to get him to relax because he was a little anxious in the gate. Fortunately, its worked out with this horse.

With his previous local connections, John Carter Cash often showed flashes of his talent. He finished second in a trial to the Grade 1 Los Alamitos Winter Derby before finishing fifth in the finale against a powerhouse group.

As a freshman, he finished fourth in the Corona Chick Handicap despite a very troubled outing and qualified to the Wild West Futurity. He began his racing career with three consecutive wins in the Northwest region, a streak that included a victory in the $27,500 Pot O Gold Futurity at Sun Downs. He also finished second in the Grants Pass Futurity.

After earning $13,750 for his Dillingham victory, John Carter Cash looks to remain a key player in the stakes division for sophomores.

We would like to make the late payment to make his eligible to the Grade 1 Los Alamitos Super Derby, Zamudio added. We will see how he continues to develop and hopefully our plans will come to fruition.

Bred by Ronald Raley, John Carter Cash has now earned $57,229 in his career. He has finished second or better in eight of 12 career starts.

Ed Allreds Close To It ran a solid race to finish second for trainer James Glenn, Jr. and jockey Erasmo Gasca. The Favorite Cartel gelding earned $5,625 for his runner-up effort to take his lifetime earnings to $19,325.

La Feliz Montana Ranch and MRB Racing LLCs Up And Coming earned $3,125 for running third. The Kiddy Up gelding won the James Smith Memorial Handicap in his previous start.

Valeriano Racing Stables LLCs Chance To Excel, a Favorite Cartel gelding purchased for $45,000 at the Los Alamitos Equine Sale, posted a terrific 1-¼ length win on the way to recording the meets fastest 300-yard time by 2-year-old in the eighth race on Saturday night.

With Jose Nicasio up for trainer Monty Arrossa, Chance To Excel covered the distance in :15.449. Balgo Racing LLCs La Jaconde had the previous fastest time by a juvenile this year when she posted the fastest qualifying time of :15.48 in the trials to the Grade II Robert Adair Kindergarten Futurity on May 3. La Jaconde will be joined by nine other top 2-year-olds for Sundays Kindergarten final.

Chance To Excel gave Arrossa his 16th Quarter Horse win at Los Alamitos this season, making him the meets leading trainer right now. Paul Jones is second with 15 followed by Scott Willoughby with 14 and Valentin Zamudio and Matt Fales with 13 each.

In the seventh race on Saturday, Linda Gordons Ynot The Favorite defeated eight other juvenile fillies to win her career debut. A full sister to multiple Grade I winner Tequila Sangria, Ynot The Favorite covered the distance in :15.739 with jockey Oscar Peinado aboard for trainer Mike Robbins. For Peinado, this was his 11th win aboard a 2-year-old this season from just 31 mounts.