The 10 fastest qualifiers, from two trial races contested, will return to Ajax Downs on Monday, October 5th to vie for the winner's share of a $100,000(CAN)-added purse in the 400 yard premier Ontario 2-year-old race.

Under jockey Ed Walton, Ah Candyland held off Had To Be Relentless by a head to get the fastest time of :20.505 seconds, into a 15 mph headwind. In her maiden debut on September 2nd, the chestnut filly was second best to fellow qualifier Ec Jets Favorite. 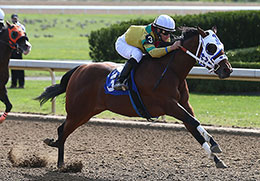 Streakinlilwagon, under jockey Helen Vanek, posted the third fastest time to the Alex Picov Memorial Futurity.
© Clive Cohen / New Image Media
Coming off a third-place finish in the August 26th Ontario Bred Futurity, runner-up Had To Be Relentless held on for the second fastest clocking of :20.519 seconds. Winless in four starts this year, the son of leading second-crop sire Hes Relentless races for owner-breeders Carol and Jaime Robertson.

Bryn Robertson saddled the bay gelding out of Had To Be Fandango by Hadtobenuts. Tony Phillips was riding.

Streakinlilwagon got her third consecutive win in the opening trial to get the third fastest time of :20.631 seconds. Under jockey Helen Vanek the daughter of multiple stakes sire Fast Prize Jordan defeated Ontario Bred Futurity winner Twixt Of Fate by half-a-length.

Jason Pascoe trains the Oklahoma-bred filly for owner-breeder GFR Equine Services. Out of La Jollas Fortune by Streakin La Jolla, the bay filly broke her maiden at Ajax July 1st then returned to win an allowance on August 12th.

Racing continues next Monday Sept. 21. Ajax Downs continues to hold live racing behind closed doors due to the COIV-19 pandemic but all the races are live-streamed at ajaxdowns.com and fans can open an account to watch and wager on the afternoon at Horseplayer Interactive, hpibet.com.