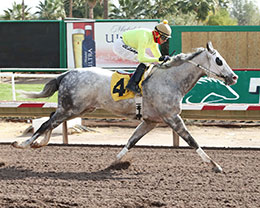 Under jockey Alex Cruz, Capital Expense (TB), a British Colombia-bred son of Scots Pine (TB), was hard to load and five-wide off the turn to defeat Classy Class(TB) by Scots Pine(TB), by 2-½ lengths. The 8-year-old completed the 870 yards in :45.169, equaling a 95 speed index.

Taken back early, Sean Michael Perry's B S Cyclotron(TB), put in a mild rally after going eight-wide off the turn to finish 2-¼ lengths back in third. Joree Scriver had the riding call aboard the 6-year-old son of Cyclotron (TB) for trainer Gabriel Alan Williams. Bradley Payne bred the 6-year-old in California from the Sought After (TB) mare Costal Cathy.

With more than 50 off-track-bettting locations across Arizona and Turf Paradise able to be wagered on many platforms across the country, Turf Paradise will be increasing its social media presence and interaction with fans on their Facebook page and Twitter account. (@turf_paradise). The track's Grand Canyon Pick-6 jackpot wager will begin with a pool of $28,009.06, which will be carried over from the end of the 2019-20 season.