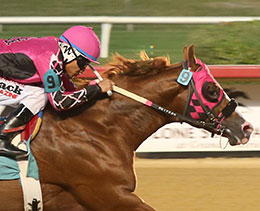 The 22nd running of the Grade 2, Dash for Cash Futurity has a strong field of 2-yr-olds going 400 yards, all vying for the majority share of the$344,050 purse. The fastest qualifier, Chilitos, owned by Omar & Anna Paredes has earnings of $56,599 from his career record of 5-2-2-0. This will be his second attempt at a Futurity purse after finishing sixth in the Remington Park Futurity last April. Adrian Huitron trains the colt by Apollitical Jess and Nestor Duran will ride.

Second fastest to qualify was Domishay. The colt by Dominyun has won 4 of 8 starts and earned $40,972. This is the first futurity hes qualified for. Domishay races for owner Paula Cristina Villatoro. He is conditioned by last years leading trainer Josue Ponce and will be ridden by last years leading rider Jesse Levario.

Cruz E. Navas Trump My Record may have qualified with the third fastest time, but he could be tough to beat in this. A colt by Apollitical Blood, Trump My record has won six of his seven career starts earning a total of $326,802. His list of victories include the Grade 3 Harrahs Futurity and the Grade 2 Sam Houston Futurity.

His only career loss was a fifth place finish in the Grade 2 TQHA Sale Futurity at Retama Park after he stumbled out of the gate and was bumped. Trump My Record is trained by Jose Luis Sanchez III. Jockey Eddie Sanchez is the only rider the colt has ever had aboard. He will again ride Saturday.

Fastest qualifier Sumokeonthewater, a gelding by Fdd Dynasty was impressive in his trial posting a speed figure of 112 for the effort. He has top connections in trainer Josue Ponce and jockey Jesse Levario, but will have to take on the filly, who is undefeated this year, Eysa Jess Jumpn.

Eysa Jess Jumpn by Heza Fast Dash is a perfect 6-for-6 this year including victories in the Grade 3, Sam Houston Derby and Grade 3, Delta Downs Louisiana Bred Derby. The filly has a career record of 14-11-0-1 earning a total of $674,802. She is quick out of the gates and hasnt been caught in any of her starts this year.

She is owned by Jose Estrada Quarter Horses and trained by Fructuoso Huitron. Jockey Pedro Espinosa will have the mount.

Here is the field for the Dash for Cash Derby in post-position order with jockey & morning line odds:

All Lone Star Park races can be seen at Q-RacingVideo.com.