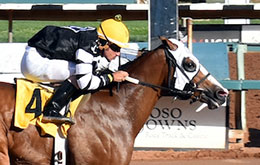 Other contenders include Valiant Tiberias, a Grade 1-winning 4-year-old Valiant Hero gelding trained by Wes Giles for owners Sergio Holguin, Cliften Nielsen, and Felix Rodriguez. Valiant Tiberias ended his sophomore season with a neck victory in the 440-yard, $350,000 Championship at Sunland Park (G1), and he is coming off of a Remington Park spring campaign during which he ran fourth, three-quarters of a length behind winner Dexxter, in the 440-yard, $210,000 Debbie Schauf Remington Park Championship (G1) on May 30.

Valiant Tiberias drew post 3 and will be ridden by Alan Hernandez.

Also on Sunday, nine Quarter Horses and Thoroughbreds are entered in the 1,000-yard, $20,000 Bobby Dan Crenshaw Memorial Stakes. Trainer Todd Fincher will send out Breaking New Ground for owner RH Resources. A 4-year-old One Dashing Eagle gelding, Breaking New Ground will be stretching out in distance of his 4 1/2-length win in an 870-yard second-level allowance optional claiming ($15,000) raec on June 27. The gelding drew post 2 and will be ridden by Alfredo Juarez Jr.

All Ruidoso Downs races can be seen at Q-RacingVideo.com.