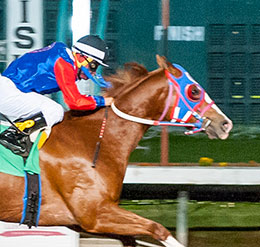 Leah Carroll Looking To Overcome Tough Foes In Grade 1 Los Alamitos Winter Derby
LOS ALAMITOS, CAFEBRUARY 11, 2021 Behind every racehorse's name there is usually a good explanation into the development of the name.

The process can be as simple as combining the names of the foals' sire and dam, but often there is a lot more to it than that, like a specific story about the foal or naming the horse after someone special or admired.

Bred in Texas, the racehorse Leah Carroll is by second-crop sire Hes Relentless out of the dam Viva La Blue by Ocean Runaway. As an embryo transfer, the filly was being carried by a recipient mare and the plan was for their ranch manager Shady Foreman to take the mare to a veterinarian when it was time to foal.

"But this one surprised Shady," Simmons recalled. "She called me one morning and said that we had a filly born in the pasture. At first, they were both okay and Shady walked them into the barn. When Shady went back to make sure they were both okay, she found that the (recipient) mare had passed away. We called around looking for a nurse mare but could not find one. We had mares at home with babies at their side, so we found one with a filly that was about a month old. We chose that one.

"When I asked Shady to do that she said, 'You know, that may not end well.'" Simmons added. "We feel blessed that our mare took the filly in because I guess it's not very normal for that to happen. We did not really have much of a choice at the time. We just prayed a lot and feel so thankful God allowed all that to happen."

Shady told Catherine that the filly was an overcomer because she had made it after having to deal with so much during the early days of her life. Overcomer immediately went to the top of the list of names for the filly.

"Shortly after that I saw a video," Simmons said.

Simmons was referring to a 60 second video of an adorable and courageous child named Leah Carroll, as she was rocking out while singing her favorite gospel song called "Overcomer" by Grammy-Award winner and "American Idol" alumna Mandisa. The video of Leah made her an internet sensation with around 40 million views at the time and still counting. The video can be seen on a Facebook page named Prayers And Love for Leah.

Leah was born with severe congenital neutropenia. She had her first bone marrow transplant in February 2014 and underwent a second transplant in 2016.

Posted about 11 months after her second transplant, the video of then 4-year-old Leah happily singing "Overcomer" became an inspiration to many. Mandisa even visited her at UCSF Benioff Children's Hospital in Oakland.

"She's an overcomer," read a post about the 8-year-old girl on the Prayers And Love for Leah page. "Leah survived Severe Congenital neutropenia."

"I saw the video of Leah singing that song, Overcomer, and I thought how awesome that would be if we named (our horse) that name. I searched for a long time and I finally found her mom, (Lindsay Bolin). When I found her, I shared with her all the information. She videoed Leah and asked her 'What do you think about having a horse named after you?' and she said that it was 'Good!' with a smile."

Leah knows about the filly's racing accomplishments and is aware that the Los Alamitos Winter Derby is her namesake's next big race.

Owned and trained by Paul Jones, Leah Carroll will start from post number one at long odds of 20-1. The filly has certainly brought a lot of smiles to Jones' racing team and will enter the Grade 1 final after running third to CM Dillingham Advice in the Winter Derby trials. Prior to that race, she won the Last Chance Dash Handicap here on December 27.

"We don't own the filly anymore but doesn't stop me from rooting and screaming for her," Catherine said. "I'm surprised they didn't hear me all the way to California. She will always be my baby. You know, when Shady put her with the mare and her one-month-old baby, little Leah kind of took over. I have a picture that I sent to Paul that Shady took and they hadn't been together very long. Little Leah was nursing, and 'Older Sister' was kind of giving her the mean eye like saying, 'Hey! That's my mom.' The baby just took over. Of course, they did share, but the little one was not one to back up. She always got after it."

Older Sister is a winning racehorse as well, having scored a maiden victory in five career starts. Owned by Catherine's husband, Bobby Simmons, the Kiss My Hock filly's official name is Bailes Y Besos (Dances And Kisses) and is under the conditioning of trainer Clinton Crawford while preparing for her first start in 2021.

Leah Carroll's Grade 1 debut comes on Saturday night and the Simmons cannot wait to see if their "Overcomer" can surprise them once again.

"We'll definitely be watching and cheering her on," she added. "You know, my dad's first name is Carroll and it is also my middle name and my daughter's middle name. That name is just so precious to us. I wish we could be there."