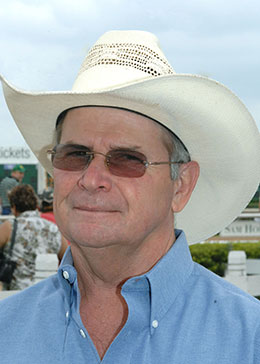 Horseman Jesse Yoakum Passes Away on October 3
By Martha Claussen

He ran horses at each of the Texas racetracks, but had several notable milestones at Sam Houston Race Park. In addition to winning the Sam Houston Classic with his highest earner, A Glint of Gold, he conditioned Wassup T Doc, who was honored as 2004 Sam Houston Race Park Horse of the Meet. Juvenile Sarah Must set a 350-yard track record in Houston, which still stands.

Yoakum gave Hall of Fame jockey Pat Day a leg up on Turbo Tex in a special charity event at Sam Houston Race Park in 2004 called "A Match Made in Heaven." It was the first time Day had ever ridden a Quarter Horse. After the victory, Day joked that he was instructed not to take Turbo Tex back and make one late run. Yoakum delighted in hearing Day's comment.

"Jesse was one of the most knowledgeable horsemen I've ever known," said Jordan. "He was a true 'hands-on" trainer; took great care of his horses and ran them where they belonged."

Jordan also gave Yoakum credit for mentoring up-and-coming trainers. One of those was Toby Keeton.

"I met Jesse in Del Rio, Texas when I was 14-years-old," recalled Keeton. "He was a great mentor and became a lifelong friend. Jesse was a man of few words, but such a good horseman. This is a big loss for our industry."

Jordan also acknowledged the relationship between Jesse and his only child, son Jerry Lee, who rode the majority of the Yoakum Quarter Horses.

"They had a very solid bond," said Jordan. "They made a great team and always seemed to withstand the ups and downs of racing."

"My dad taught me how to ride when I was very young," explained Jerry Lee. "He never said too much, so in the beginning I wasn't sure how I was doing. Finally, I figured that if he didn't say anything, it meant I was getting it right!"

Yoakum is survived by his wife of 51 years, Sharon; son Jerry Lee and his wife, Rosslyn as well as grandchildren, Jaycee Lee and Cody. As per his wishes, there will be no funeral services. The family requests that in lieu of flowers, donations be made to the PDJF.

Martha Claussen served as publicity director at Sam Houston Race Park for ten years. She continues to be active in writing and racing publicity in Texas, Louisiana, Indiana, Oklahoma and other regions in North America.