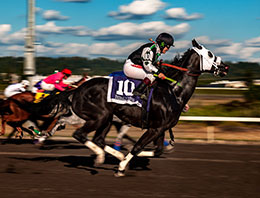 AUBURN, WAAUGUST 25, 2019The runner-up in last years edition of the race, Kool Odds was the gate-to-wire winner of the $57,222 Bank of America Emerald Downs Championship Challenge in the feature race on Sunday afternoon at Emerald.

The last of three Challenge regionals on the card, the Bank of America Emerald Downs Championship Challenge offers a berth to the Grade 1 final during the Challenge Championships at Albuquerque on October 26.

The 4-year-old Favorite Cartel gelding was tied for the third fastest qualifying position after two trials on August 4; he finished in a dead heat for third behind the two fastest qualifiers.

Kool Odds is trained by Mark Hanson and is owned by Hanson Racing LLC and Robin Dunn. He was bred in California by Steve Burns, DVM, out of the Chicks Beduino mare Kool Kue Chick.

Kool Odds was second in the same race last year but is a multiple stakes winner, including the Sandy Downs Championship Challenge prior to the Emerald Challenge trials. He has finished in the money in 12 of his 14 career starts and has $74,013 in earnings.

For Sweet Jess defeated Kool Odds in their trial but returned to run second to him the final. The 6-year-old son of One Sweet Jess was ridden by Alex Anaya for trainer Juan Sanguino and Sanguino Racing LLC. He was bred by K & R Allred Ranch in California, out of For Some Cash, by Chicks Beduino.

For Sweet Jess is a multiple stakes winner and long-time member of the Challenge circuit. As a 2-year-old in 2015, he was second in the Grade 2 John Deere Juvenile Challenge Championship stakes at Lone Star.

Cm Boom Shakalaka is trained by Nick Lowe, who also owns with Chris Sutton. He was bred in Randy Dickerson in Oregon out of Mi Fames a Daddy, by Dash Ta Fame.