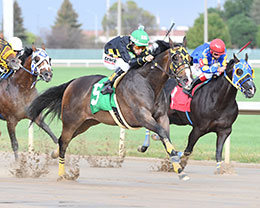 Jason Olmstead conditions the Minnesota homebred, out of Paint Or More by Pyc Paint Your Wagon, for Lunderborg, LLC. The 5-year-old has compiled a (24) 7-6-6 record and earned $253,599.

Completing the Bank of America field were Faster Than Hasta, Paint My Pilot, Another Shot, Political Candy and Dynasty Ice 123. Marfilmio was scratched.