Ms Esther Headlines AQHA Remington Distance Challenge Trials
Ms Esther will be looking for her first ever AQHA Distance Remington Challenge(G2) victory if she can qualify from two trials on Saturday night. 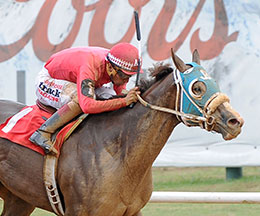 Ms Esther won two 870-yard stakes during the 2019 Remington meet and ran second in the 870-yard, $104,500 AQHA Distance Challenge Championship (G1) at Albuquerque Downs on October 26. The mare drew the rail post and will be ridden by Benito Baca in the second of two trials.

Ms Esthers four opponents in the first heat include Madewell, a homebred 6-year-old Jess Jones gelding trained by Bernard Baca for owners Ray Madewell and Davy Madewell. Madewell will be making his season debut off of a 5-year-old campaign during which he banked $82,188 from eight outs and scored a half-length victory in the 870-yard, $50,000 Remington Distance Championship (G2) on closing day of the 2019 meet.

Madewell drew post 5 and will be ridden by Stormy Smith.

Coming off a win in the Covered Wagon Stakes(G3) at Prairie Meadows last fall, The Louisiana Dream will face five rivals in the second trial (race 3). Manuel Campos will saddle the son of champion sire The Louisiana Cartel for owners Denise and Ronald Van Amburgh and Hugo Sierra Barron.

J.E. Jumonville bred the 6-year-old gelding in Louisiana from the Apollo (TB) mare In His Dreams. Francisco Giles has been named to ride the $42,598 earner from the inside post-position.

All Remington Park races can be seen at Q-RacingVideo.com.