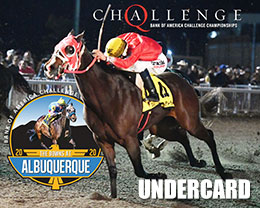 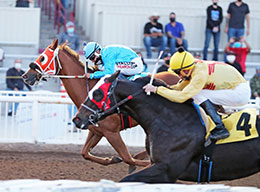 Senor Frogs has earned $76,458 in his 14 career races, including second-place finishes in the 2020 Bank of America Ruidoso Championship Challenge, the 2019 John Deere Emerald Downs Juvenile Challenge and the 2019 Wild West Futurity at Los Alamitos. He began his stakes-winning career with the Grants Pass Firecracker Futurity last summer.

Df Lord Garvan was bred in Oklahoma by Kelly and Yearsley Equine, LLC. He is sired by Apollitical Jess and is out of the Tres Seis mare Three Green Leaves.

After competing in multiple futurity and derby trials, Df Lord Garvan won his first career stakes race earlier this year: the Boyd Morris Memorial Stakes (G3) at Remington. He finished fourth in the Bank of America Canterbury Park Championship Challenge (G3) and ran in the Bank of America Prairie Meadows Championship Challenge (G2) and the Two Rivers Stakes (G3) before shipping to Albuquerque.

With five wins in 19 starts, Df Lord Garvan has earned $90,278 in his career, most of which was earned this year.

Kowboy Jim led the field early but was caught late to finish third. Cody Smith was aboard the FDD Dynasty gelding for owner, trainer and breeder Dean Frey. Bred in California, Kowboy Jim is out of Counting On You, by Mr. Jess Perry.

Racing head-and-head throughout, Sinsational Tacha, and Easily Lethal hit the wire at the same time to share the win in the $40,000 Pitre GMC Distaff Stakes on Saturday's Bank of America Challenge Championships undercard at The Downs at Albuquerque. 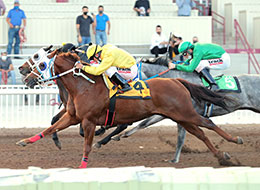 Making only her third lifetime stakes appearance, Easily Lethal races for owners Mark and Peggy Brown and is trained by Mark Brown. The daughter of leading sire Corona Cartel was bred in California by Abigail Kawananakoa from the First Down Dash mare Pretty Lethal. Ridden by Sergio Dominguez, she has earned $21,681.

A neck off the leaders in the blanket finish to the Pitre GMC Distaff was Norman Hollingsworth's Docs River Sprit. Bernard Baca conditions the 3-year-old Jess Jones Oklahoma-bred from the Mr Eye Opener mare Eye Spy Valletta. Second in the Grade 3 ARC Will Rogers Distaff Challenge in her last start, Docs River Spirit has earned $46,483. Dusty Rose Ranch LLC is the breeder.

Shakia On Ice Shocks in the $40,000 Lobo Derby at Albuquerque

The second longest price on the board, Shakia On Ice pulled the upset in the $40,000 Lobo Derby, an undercard race for 3-year-olds on Challenge Championship night at Albuquerque on Saturday night.

Shakia On Ice edged out Dynasty Dimano and Eyesa Forrest in a close finish in the 400-yard race. The final time of 19.736 earned the winner an 88 speed index. 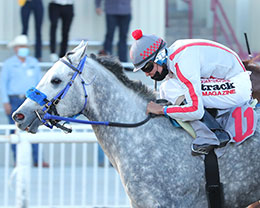 Shakia On Ice, under jockey Omar Iturralde, winning the $40,000 Lobo Derby on Saturday's BOA Championships undercard at The Downs at Albuquerque.
© Coady Photography

Shakia On Ice ($28.60) was an also-eligible entry and drew into the race following early scratches. The 3-year-old gelding earned his first stakes win and second lifetime victory in 10 starts. His earnings now total $37,475.

Omar Iturralde had the call on Shakia On Ice for trainer Luis Iturralde and owner Fermin Lucero. He was bred in Oklahoma by Weetona Stanley, by Hez Our Secret and out of Fast Prize Shakia, by Shazoom. Fast Prize Shakia is an unraced mare out of 2002 Heritage Place Futurity (G1) winner Fast First Prize.

Dynasty Dinamo and jockey Albert Medrano broke on top and yielded late to Shakia On Ice. The FDD Dynasty gelding is trained by Jesus Olivas and is owned by Ricardo Ramirez. He was bred in Texas by Tyler Graham and Franklin Collins, out of the Streakin Sixes mare Witchs Streak.

Dynasty Dynamo was last seen racing at Rillito in February and was second in the 2019 John Deere Juvenile Turf Paradise Challenge last year. The lightly raced gelding has earned $22,767 in seven starts.

Eyesa Forrest completed the outside trifecta for trainer Emily Cardenas and owner Tomas Avitia; Brian Barraza was up. The Texas-bred colt is by High Rate of Return and out of Eyesa Darlin, by Eyesa Special, bred by J Bar 7 Ranch LLC.

The multiple stakes placed colt has two wins in 10 starts and $49,149 in earnings. Eyesa Forrest qualified to the Hobbs America Futurity (G2) at Zia in 2019 and competed in the Albuquerque Juvenile Stakes on last years Challenge Championship card.

Cc Revv Her was moved from second to first in the $35,000 Albuquerque Juvenile Stakes on the Bank of American Challenge Championships undercard Saturday night when Fdd Princess was DQ'd for interference and placed ninth. 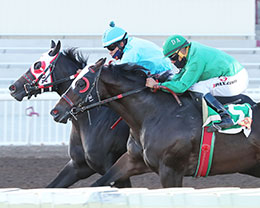 Cc Revv Her (#5 inside), under jockey Porfirio, was named the winner of the Albuquerque Juvenile Stakes on Saturday's BOA Championships undercard at The Downs at Albuquerque. © Coady Photography
CC Revv Her, under jockey Porfirio Cano, was only a head off Fdd Princess after a strong rally to finish the 350 yards in :17.703 seconds. It was the second win in five starts for the son of leading sire Corona Cartel and the $16,100 winner's purse boosted her bankroll to $21,101.

Stablemate Mae Capone, also owned by Mendoza and trained by Navarro, was moved to second, picking up $7,000 for her effort. Jockey Hector Aldrete had the riding call aboard the FDD Dynasty filly out of Cold Hearted Cartel by Corona Cartel. Lazy Creek Ranch is the breeder.

In the first of ten stakes on the Challenge Championship card at Albuquerque, Holy Storm turned the tables on Faster Than Hasta to win the $35,000 Sandia Stakes. 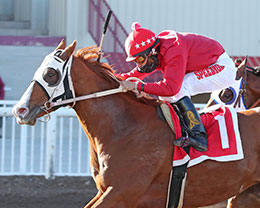 The final time for the undercard stake was 45.357; Holy Storm earned a 103 speed index.

Trained by Pat Swan, Holy Storm is a homebred for Dan Kjorsvik in Minnesota, by Red Storm Cat and out of the thoroughbred mare Holy White Socks, by Polished Brass. Ramiro Garcia had the call in Saturdays stake.

Holy Storm has six wins and $98,949 earned in 29 career starts, including 12 starts and four wins at 870 yards. Earlier this year, the 4-year-old gelding competed in the Cash Caravan Stakes at Canterbury and the Remington Park Distance Championship (G2) and is multiple stakes placed at Canterbury and Prairie Meadows.

John Johnson owns the 6-year-old gelded son of Hasta Be Fast, who was bred in Wyoming by Wardell Quarter Horses. He is out of the Special Leader mare Leadmetoyourladder, making him a full brother to stakes winner and 870-yard specialist Hastabealeader.

J Boy A and jockey Francisco Amparan finished third for owner and trainer Thomas Gonzales. The 7-year-old son of Jess Zoomin was bred in Texas by Ted Abrams, out of Mighty Classy Lady, by A Classic Dash.

J Boy A made his 28th career start at 870 yards and has finished in the money at that distance 15 times. He was second in 2019 edition of the Sandia Stakes before running in the King Rick Rack Stakes (G3) at Zia and the ARC Remington Park Distance Championship Stakes (G2). In his career, J Boy A has banked $135,286.