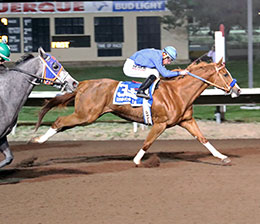 Lynnder 16 ($5.60) was the post-time favorite for the event after winning both the ARC Canterbury Park Distaff Challenge in July and the ARC Ruidoso Downs Distaff Challenge in August. On Saturday night, she earned a 90 speed index after crossing the wire of the 400-yard race in 19.666.

The Apollitical Jess filly is owned by Tom Maher and Richard Tobin and was bred in Oklahoma by James and Marilyn Helzer, out of the Corona Cartel mare Tinys Corona Queen.

Lynnder 16 won the Remington Park Oklahoma Bred Futurity (RG2) in 2018 and qualified to the All American Futurity (G1) later that summer. She qualified to the Ruidoso Derby (G1) as a 3-year-old and competed in multiple graded stakes in her 4-year-old campaign.

Trained by Riley Moosman for owner Ron Moosman, Jr Prissys Blood was ridden by his usual rider from the Intermountain region, Jesus Valenzuela. The filly was bred in Nevada by J R Stables, out of the Panther Mountain mare Prissy B Panther.

Jr Prissys Blood has won seven of her 13 career efforts and has earned $106,356. Among her career wins are the Corona Chick Handicap at Los Alamitos last winter and the Cowboy State Futurity at Energy Downs last June.

Loco Ocho was ridden by Mauro Salcedo for trainer Garth Blatter and owners Les and Darla Barlow. The Barlows also bred the 4-year-old filly was bred in Idaho, by the Louisiana Cartel and out of multiple stakes winning mare Sign of Pride, by First Wrangler.