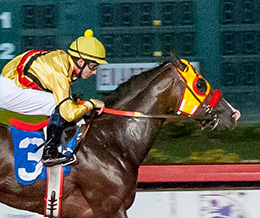 The 8-race program will get underway at approximately 7:30 p.m.

It was the Ed Allred-owned Nomadic who was most impressive during the derby trials on July 12, as the Favorite Cartel gelding won his heat by ¾ lengths over both Cattail Cove and Runforyourlife. This is also the second time that Nomadic has posted the fastest time on a trial night. The ultra-athletic looking runner also recorded the top time in the trials to the Los Alamitos Two Million last year.

"When he posted the fastest time to the Two Million last year, I honestly did not think anybody could beat him (in the final)," trainer Scott Willoughby said. "Obviously, there were some great horses in the Two Million final. He just didn't get away from the gate in the Two Million as well as he usually does. It cost him the race."

Nomadic will be going after his fifth career win in Sunday's Derby.

Link Newcomb's Cattail Cove stumbled at the start of his sophomore debut when running sixth in the Vandy's Flash Handicap on June 28 before returning with a solid effort in his Governor's Cup trial. The Juan Aleman-trainee was super consistent as a juvenile last year, catching the eye with three big wins, and could be sitting on a monster effort on Sunday.

Rosenthal Ranch LLC's Runforyourlife was third in a very strong trial to the Grade 1 Los Alamitos Winter Derby back in January and then landed in an equally strong heat in the trials for this race. He broke a lot sharper in his second start of the year and maintained his speed throughout to hit the wire in unison with Cattail Cove. Other top contenders in this race will include Autumn Handicap winner Just Be Real, the stakes placed Fire By Night and Governor's Cup trial winner Up For Speed, who looked great when winning his heat by ¾ lengths. Allred will have five horses in this race with Nomadic, Just Be Real and Up For Speed being joined by Close For It and Bono Is Good.

Ed Allred will look to win the Restricted Grade 1, $100,000 Spencer Childers California Breeders Championship for the second year in a row when he is represented by Grade 1 Vessels Maturity winner Chocolatito in the 400-yard race.