Champion A Revenant Laid To Rest
A Revenant returns after winning the Grade 1 Rainbow Futurity at Ruidoso Downs. 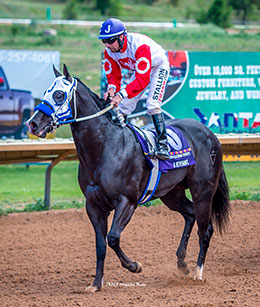 Owned by the partnership of Hubbard, Southway, Cope and Rafter W, A Revenant was named the AQHA Racing Champion 2-Year-Old Colt in 2016 after winning three of four career starts that included the Rainbow Futurity(G1) and second in the Ruidoso Futurity(G1). Conditioned by Mike Joiner and ridden by champion jockey Cody Jensen he earned $604,800.

Following an injury prior to the 2016 All American Futurity trials he was moved to Crystal Springs Farms in Tularosa, New Mexico to rehab under the care Tom and Leslie Goncharoff and David Ortega.

Bred by Julianna Hawn Holt, the son of leading sire Mr Jess Perry sold in the 2015 Ruidoso Select Yearling Sale for $152,000. He is out of Rainbow Futurity(G1) winner Thewayyouwantmetoo by Mr Eye Opener.

In 2018, A Revenant moved to 6666 Ranch and bred a full book of mares for two seasons under the care of Dr. Glenn Blodgett.

Tom Goncharoff told TRACK Magazine "He was a great horse with a very promising future. This is a tremendous loss."

"We are especially grateful to Dr. Blodgett and his team at the 6666 Ranch for the way they managed A Revenant during his time in Guthrie. No one could have done better," he said.