Bob Johnson Trainees Are Looking To KO The John Deere Juvenile Championship
Divas First Moon enjoys her hay during Bank of America Challenge Championship week at The Downs at Albuquerque. 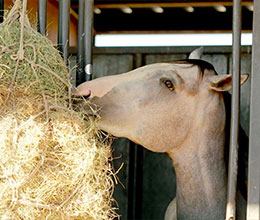 Trainer Robert "Bob" Johnson will saddle two horses in the $125,000 John Deere Juvenile Challenge Championship (G3)  the horses will race from post positions No. 1 and No. 2, and he's certainly hoping that will be how they finish as well.

Both horses race for owner and breeder David Wisdom.

The second-choice in the morning line is Divas First Moon, a daughter of First Moonflash and out of the Royal Shake Em mare Shake Em Diva. She has won four of seven starts and earned $43,304.

"After about her second out, she's just been phenomenal," Johnson said.

She broke her maiden at third asking, and since then ran second in the North Dakota Quarter Horse Racing Association Futurity, won the 1889 Futurity at Canterbury Park, and then captured the John Deere Prairie Meadows Juvenile Challenge.

Her stablemate is Sweet Wild Time, a sorrel daughter of One Sweet Jess out of the Royal Shake Em mare Royal Wild Time.

She broke her maiden at first asking at Canterbury Park, qualified to the $156,200 Mystic Lake Northlands Futurity, won the NDQHRA Futurity over Divas First Moon, and then was third behind her stablemate in the John Deere Prairie Meadows Juvenile Challenge.

Johnson will also send out John Johnson's good campaigner Faster Than Hasta in the undercard race, the Downs Casino Stakes, also drawing the inside post position. This horse has made 26 career starts and earned $182,357 in his fruitful career.

The South Dakota competitors are loaded and ready  1-2.