Ridden by Juan Pablo Leon for trainer Jorge Farias, Bail Czech won at 17-1 odds while covering the distance in the fastest time of :19.764. Farias is now the main trainer for EG High Desert Farms, a racing operation that perennially ranks among the top three in Quarter Horse wins at Los Alamitos.

In Bail Czech, Farias inherited a talented Corona Czech gelding with over $100,000 in career earnings. The winner of the Vandy's Flash Handicap last year, Bail Czech improved his record to five wins in 19 starts. He ran in the Los Alamitos Super Derby and was second in the Golden State Derby last year. 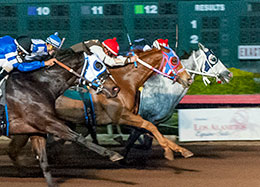 Corona Jumpim Mrl (#4) edges Jess Macho Corona(#5) and Jess My Kiss (#5) in the second Winter Championship trial on Sunday night at Los Alamitos Race Course.
© Scott Martinez
Leon has been on a meteoric rise to stardom over the past five weeks. He piloted Cartel Jess Rockin to victory in the Grade 1 Los Alamitos Two Million Futurity on December 15 and was back aboard the 2019 2-year-old champion filly in her qualifying victory to the Grade 1 Los Alamitos Winter Derby here on Saturday night.

His previously established working relationship with Farias has now provided the jockey with the opportunity to ride horses for one of the biggest barns at Los Alamitos in EG High Desert.

Leon qualified one other horses to the Winter Championship, as he rode My Favorite Cartel to the 10th fastest qualifying out of the second trial.

The top five finishers from each of the first two trials advanced to the Brad McKinzie final to be held on Sunday, February 9.

The winner of the Brad McKinzie final will earn a provisional berth to the 2020 Champion of Champions. In addition to Bail Czech, Poweful Favorite, Bos Time Machine, Katies Easy Moves and Red Hawk Cartel also qualified to the final.

"We're starting to figure him out a little bit or maybe he's figuring us out  one or the other," the trainer said. "He's a pretty cool horse. We put a flipping halter on him. Sometimes that's our go to move. He's been much better. He fought the gate all the time without it. Now he goes in there and stands. He's not a rocket out of there, but at least he gets going in the right direction. He likes to run them down at the end of the race. For a big, heavy horse he does well. He'll dig in and prove that he can run a little bit. He prevailed tonight. His owner in Brazil, Marcos Ribeiro Leite, he's probably pretty happy right now."