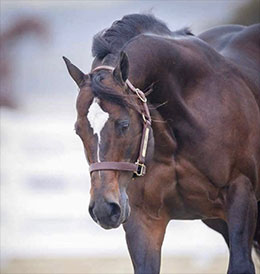 Corona Cartel, the first Quarter Horse stallion to win a $1 million race in California, was laid to rest earlier today at Lazy E Ranch in Guthrie, Oklahoma, at age 25.

The bay son of First Down Dash's son Holland Ease had earners of $62,790,257 to his credit at the time of his passing. This ranks him behind only First Down Dash.

Corona Cartel and First Down Dash are the only two horses in the more than 75-year history of the American Quarter Horse Association to sire the earners of more than $60,000,000. Through today's date, Corona Cartel has average earnings per starter of $40,779. Corona Cartel's daughter Blues Girl Too is the breed's No. 1 all-time money earning female.

Bred by Bob Etchandy of Anaheim, California, Corona Cartel was the first foal of Champion runner Corona Chick $591,236. Corona Chick would go on to be one of the breed's most influential producers.

Etchandy would consign his bay colt foaled March 31, 1994 to the nascent Vessels-Schvaneveldt Sale where he brought $43,000 from Celina Molina and was the second highest selling colt in the sale.

Corona Cartel finished his two-year-old season with $544,435 in earnings. The only horse with more earnings that year was All American Futurity winner Streakin Flyer.

Corona Cartel was one of those rare horses to win big races at Los Alamitos Race Course and Ruidoso Downs in the same year. He won the Kindergarten at Los Alamitos in May, the All American Consolation at Ruidoso on September 2, the Tiny's Gay Handicap at Los Alamitos on November 15 and the Los Alamitos Million Futurity on December 21. The versatile runner racked up those wins at 350, 400 and 440.

At the end of the latest completed statistical year, Corona Cartel ranked No. 2 behind only First Down Dash in lifetime earnings. Corona Cartel's son Pyc Paint Your Wagon is the No. 2 All-Time Leading Living Sire, behind only the pensioned Walk Thru Fire.

With $8.1 million, Corona Cartel is currently the No. 2 maternal grandsire of 2019 money earners. Lifetime he ranks in the Top 5 with more than $80 million.

With an ample supply of frozen semen, Corona Cartel is expected to remain a major sire every year for several years to come.

The American Quarter Horse Association has awarded at least one Running Champion title to each of these runners sired by Corona Cartel:

Thirty horses sired by Corona Cartel have won these Grade I races:

"I deeply regret that Corona Cartel, upon veterinary advice and with humane consideration, was euthanized today due to age related infirmities.

The term "great" may be used too loosely in today's society, but without question his accomplishments at the racetrack and in stallion service place him at the highest levels of success in our industry. From October 26, 1997, the day Corona Cartel arrived at Lazy E Ranch, I and the staff of Lazy E Ranch were around and exposed to true greatness.

Today, there is a tear in the fabric of the horse universe because Corona Cartel has left us. All of the Lazy E staff cherished the 22 years we had with him, for he brought to us the example of what a racehorse and a stallion should be. He was smart, kind and had an air of quiet dignity that few possess. The word regal often comes to mind when one thinks of him.

It is a rare week that we do not receive a phone call or an email from somewhere in the world from an owner or breeder seeking to be involved with his genetics. The desire for his bloodlines is worldwide today because his influence has permeated so many other facets of the horse industry. Aside from racing, the Corona Cartels are known as horses that can perform at the highest levels, no matter the task or the discipline. His intelligence and that of his offspring have served their owners well. Their willingness is legendary.

Corona Cartel's influence is flowing forward. He has become a Sire of Sires and currently has five sons in the Top 25 Leading Sires of Money Earners. Also, he is the #2 Leading Broodmare Sire of 2019.

In these days of "super books," it is important to note that the largest number of mares in any of his books was only 101 and that was in a bonus syndicate year. For the most part, he bred only 88 syndicate mares each year. An incredibly remarkable accomplishment when one considers he has sired nearly $63,000,000 in earners, breeding limited books. He was responsible for more $100,000-sale yearlings than any other sire throughout the last 22 years!

We thank Celina Molina for initially having the trust and confidence in Lazy E Ranch to begin his stallion career here and we are eternally grateful to all the members of the Corona Cartel Syndicate for continuing to allow us to manage their asset once he was syndicated and until his passing.

Our association with this tremendous group of breeders continues as we are now charged with managing the frozen semen for the Syndicate going forward. We thank them for allowing us this continued association with Corona Cartel."

Corona Cartel has been interred at Lazy E Ranch.