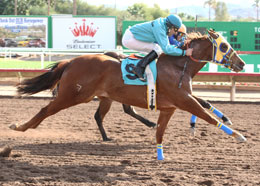 The pair of two-year-olds, owned by the Fales, came into the race with the top two qualifying time from the December 2 trials. The lightly raced Harlee Tucker got her second career win in four starts.

Madd Dog, a homebred for Carolyn and Ralph, could not hold off the fast closing Harlee Tucker, getting out-nodded a nose by his stablemate at the wire. The Dog Daze Afternoon gelding, out of Merri Roc who is also a daughter of Rocky Jones, earned $6,365 for the effort. Already a stakes-winner and multiple stake placed runner, Madd Dog boosted his career total to nearly $60,000 with a 4-2-2 record from nine starts. Jorge Bourdieu was aboard.

Following the leaders were El Estero, Yn Makario and La Perrita de Anya. Pancho Pantera and On A Sundayafternoon dead-heated for 7th place with Kerwhango last. Nonitas Scooter was scratched.