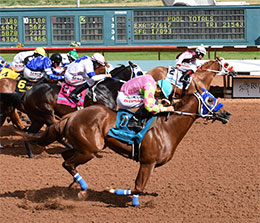 The other trainers to score the Ruidoso Derby-Ruidoso Futurity double on the same weekend are "Sleepy" Gilbreath, Russell Harris, Mike Joiner and Rudy Valles. Gilbreath performed the feat twice.

The odds-on favorite, Fernweh raced the 350 yards in :17.477 to get the win by a head over Bv Sheslikethewind. Oatman Creek Senator was one-half length back for third.

"She left there (the starting gate)," winning jockey Ricky Ramirez said. "She always seems to be running by herself and she did that so I just kept her busy."

The Favorite Cartel-sired Fernweh has been a prime prospect in the Wood operation since she first worked from a starting gate at the Wood operation in Lubbock for Blane Wood, Trey's father. She showed so much ability that Blane immediately sent her to Trey at the track.

"She's all speed and all racehorse," Trey Wood said. "She ran a perfect race."

Trey Wood complimented the entire Wood operation when asked about the derby-futurity double. "We get good horses and when you get horses like them, you just keep them happy," he said.

Bv Sheslikethewind was making her fourth career start and was coming off two wins. The Apollitical Jess daughter won her trial to the Remington Park Oklahoma-bred Futurity and then scored a one-half length win in her Ruidoso Futurity trial. Her time of :17.857 made her the fifth and final qualifier on the first day of trials.

The daughter of leading sire Apollitical Jess, from the Corona Cartel mare Corona Cayenne, has compiled a (4) 2-1-0 record and used the $180,000 Ruidoso payday to increase her earnings total to $194.032.

Wootan Racing's homebred Oatman Creek Senator is still a maiden after two starts, however is now a top futurity prospect. The Mike Joiner-trained gelding was second by a neck in his Ruidoso Futurity trial with a :17.875 time, the fifth-fastest time on the second day of trials.

J.R. Ramirez rode the gelding by Louisiana Senator in each of his outs. Oatman Creek Senator picked up $100,000 for his third place effort