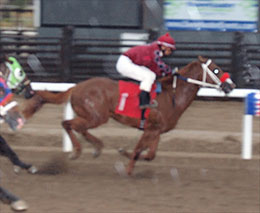 ROCK SPRINGS, WYSEPTEMBER 8, 2019 Cd Makin Us Proud is a maiden no more after a win in the $7,500 Wyoming Bred Juvenile Stakes (not black-type). The 2-year-old colt failed to qualify for the Wyoming Bred Futurity but took full advantage of the Juvenile stakes to pick up his first career win.

Jose Figueroa had the call on Cd Makin Us Proud for trainer Diana Garfias. He is owned and bred by Daniel and Carol Lee in Wyoming, by Maknmoves and out of Double Otta, by Proudest Effort. Cd Makin Us Proud was sixth in his trial on August 24, which was won by the fastest overall qualifier Eyesa Special Snoopi.

Rush Revere and Jesus Valenzuela finished second as the post-time favorite. Riley Moosman trains the Maknmoves gelding, who is owned by Dan and Patricia Baker. He was bred in Wyoming by Bryce Moosman, out of Bk Katniss, by Hard Hitting.

Rush Revere had the most experience in the field, with two career wins already in his seven starts in 2019. He exited the same trial as Cd Makin Us Proud and the fastest qualifier but stumbled at the break.

Zoomin Brindis and Jose Guzman completed the trifecta for trainer Jesse Villegas. The 2-year-old Wyoming-bred gelding is owned and bred by Gerald Kaul, by Brindis Por Cayenne and out of Zoomin Daphne, by Azoom.