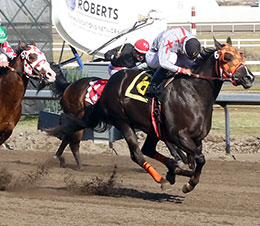 The 10 fastest qualifiers, from two trial races contested today, will return to Century Downs on Sunday, October 20th to vie for the winner's share of a $29,765(CAN) purse.

Papas Coleen broke alertly in the second trial under jockey Ceasar Cervantes to post a convincing one-length win over Jb Runaway Special while getting the top qualifying mark of :19.885 seconds over the 400 yards into a 26 mph headwind.

Trainer Darcy Hawkes saddled the Alberta homebred daughter of leading Canadian sire First Timber for owner-breeder Donalda M. Cochrane. The chestnut filly has compiled a (10) 5-1-1 record and banked $33,016. She is out of the Lanes Leinster mare Cash In This Lane. 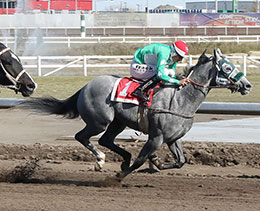 The stakes-placed gelding owned by Alison Christie entered Sunday's trials off a second-place effort in the aforementioned Alberta Bred Derby to Papas Coleen in his last start. James W. Butterfield bred the two-time winner in Alberta from the Holland Ease mare Tisa Easy Effort. He has earned $17,179.

First Timber was the leading trial sire with thee qualifiers.