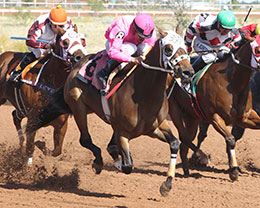 The daughter of leading New Mexico sire Woodbridge will join nine other state-breds who qualified today for the October 27th $200,000-est. New Mexico Cup Derby(RG2). A win in the final would score her a futurity-derby double in the stakes series at Zia Park.

The brown filly finished half-a-length in front of Cd Mamas Boy, after some mild urging from jockey Jaime Leos in the first trial. She completed the 440 yards in :21.920 seconds, to set the top qualifying mark.

In the second trial Sissie and Bob McClure's homebred Tooflashforyou defeated Freedom Flash by half-a-length to get the second fastest clocking of :21.980 seconds. Harvey Baeza trains the daughter of champion sire First Moonflash from the Holland Ease mare Holland Fire. Ridden by Hector Aldrete, Tooflashforyou has earned over $55,000.

Baeza also saddled Hezajessforsure to the 8th fastest time for the McClures'.

Leading sire First Moonflash has another big trial day on Sunday after getting the top six qualifiers into the New Mexico Cup Futurity(G2) on Saturday at Zia Park. Today his offspring took six of 10 qualifying spot for the derby.

All Zia Park races can be seen at Q-RacingVideo.com.