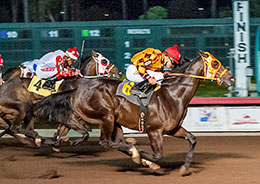 Senor Frogs Is Fastest Qualifier To Wild West Futurity
LOS ALAMITOS, CAOCTOBER 5, 2019Freddy Ibarras Senor Frogs will headline the running of the $117,150 Wild West Futurity after posting the fastest qualifying time when outdueling Gary and Jeralyn Messengers Zoom On Jess in the second of four trials on Sunday at Los Alamitos.

Ridden by Jesus Rios Ayala for trainer Lindolfo Diaz, Senor Frogs crossed the wire ¾ lengths ahead of Zoom On Jess, a winner of The Plan Handicap at Los Alamitos in his previous start. Senor Frogs, an Oregon-bred gelding by Coronado Cartel, did everything right in this 350-yard trial. 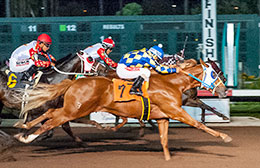 Ms Patty Cake(#7) defeats John Carter Cash(#2) in the opening trial Sunday at Los Alamitos. © Scott Martinez
He broke like an arrow from post number six and then pulled away from his rival to score his fourth win in six career starts. Senor Frogs covered the distance in :17.751 and will now lead the way in the Wild West Futurity final, which will be held on Sunday, October 27.

Cm Singing The Blue (#9) defeats fellow qualifier (#La Reina Madre) in the final trial. © Scott Martinez
A total of 27 juveniles competed in the four trials with the 10 horses moving on to the win. The Wild West is for horses that have raced in the Intermountain and Northwest regions plus Arizona, Nevada and Canada.

Zoom On Jess, who saw his three-race win streak snapped by Senor Frogs, still finished with the second fastest qualifying time. Trained by Monty Arrossa, Zoom On Jess is a homebred gelding by Jess Zoomin out of Feature Miss Fame. 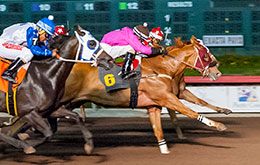 Goldie Hocks (#8) qualifying with the ninth fastest time from the fourth trial. © Scott Martinez
Carolyn and Ralph Fales Ms Patty Cake won the opening trial by a nose over Nick Lowes John Carter Cash. The win made Ms Patty Cake the third fastest qualifier after hitting the finish line in a time of :17.886. Ridden by Erasmo Gasca, Ms Patty Cake was picking up her first win in four career starts.

Jon Lane Hendersons Goldie Hocks, a filly by Kiss My Hocks, won her trial at 8-1 odds for trainer Justin Clark and jockey Ruben Lozano. This was her first win since scoring in her first two lifetime starts back in May/June.