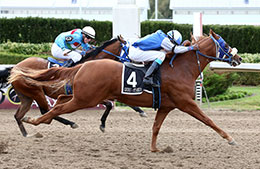 "That was kind of a ping pong ball start," said Phillips. "The 2-year-olds all broke pretty even but then there was a lot of bumpity- bump and he was kind of taken a little bit by surprise.

"I screamed at him 'come on kid, let's go!' and he heard me. He went on and did his thing and I am really happy and proud."

Bryn Robertson conditions the son of Mighty B Valiant for owners Carol and Jaime Robertson. Bred in Ontario by Guylaine Paquin, Easy Street is out of the Holland Ease mare Easily Holland. He also won the Ontario Bred Futurity last July. 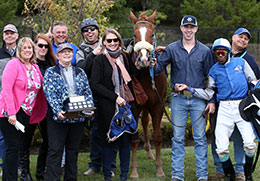 The winning connections of Eazy Street accept the Alex Picov Memorial Futurity stakes trophy Monday at Ajax Downs. © New Image Media / CliveCohen
The Robertsons, who also campaign one of the year's top older horses Had to Be Ivory, have won 11 races from 20 starts in 2019. The purchased Eazy Street privately last year.

"I had heard Dr. Paquin had a horse for sale so we went and looked at him and we bought him and a younger half-brother," said Bryn Robertson about acquiring Eazy Street. "He's a May 28 foal so next year he's going to be a big horse."

Runner-up A Lone Hand picked up $10,251(US) for finishing second. The multiple stakes-placed son of Azure Down Three races for owner-breeder James Bogar and is conditioned by trainer Barry Wood.

Brian Bell rode the 2year-old out of Special Royal Takeon by Strawfly Special. An earner of $31,440, he was also runner-up in the Ontario Sires' Stakes Futurity on August 25.

Still a maiden from four starts this year, Sweet Night Fever earned $5,125(US) for his third-place effort. Cory Spataro was aboard the Iowa-bred son of multiple stakes sire Sweet First Down. Owned-and-trained by Craig Spada the black gelding is out of Do Ya Disco by Disco Jerry (TB). Erin Chrisman is the breeder.

Major stakes action continues at Ajax Downs Thanksgiving Monday, October 14 with the Alex Picov memorial Championship featuring another showdown between the Robertson's Had to Be Ivory and three-time Horse of the Year Country Boy 123.

Also next week, the first 100 kids at the track will receive a free pumpkin to decorate and there will be other prizes and an appearance by the headless horseman.