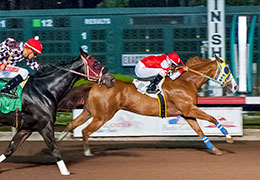 Ridden by Oscar Andrade Jr. for trainer Matt Fales, Jess A Cowboy led from start to finish on the way to record his fourth stakes win at Los Alamitos. Hes won six other stakes races during his great career that now features 13 wins in 39 career starts. The 7-year-old homebred gelding by Dejon earned $8,800 for this win to take his career earnings to $245,697.

Trainer Matthew Fales and jockey Oscar Andrade, Jr. are joined by Ralph and Carolyn Fales in the John Ward Handicap winner's circle. © Scott Martinez
"We dont run him that often," Fales said. "This is only his fourth out this year. I think that helps save him in the long run. Then again, youve got to have a good horse. He makes me look really good. Were going to take it day by day, possibly the Z. Wayne Griffin Directors Trials (in three weeks) coming up. I might take him to Phoenix for another stakes. Ill have to talk to Larry about it and have Oscar give him a little exercise to see how he feels."

Jess A Cowboy, who won the Blane Schvaneveldt Handicap in his previous start, covered the 400 yards in :19.845. He was the 4-5 favorite in this race.

Nick Lowe and Chris Suttons CM Boom Shakalaka earned $3,600 for finishing second. He entered this race after finishing third in the Emerald Downs Bank of America Championship in his previous start. He won a pair of stakes races here last year  the James Smith Memorial and Dillingham Handicap.