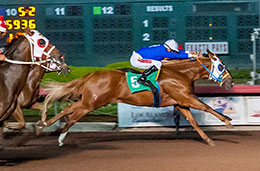 The Wild West Futurity features 2-year-olds which previously raced in the Intermountain and Northwest regions, plus Arizona, Nevada and Canada. Held for the first time in 2010, past winners of this race had been bred in Utah, Idaho, Washington, Oklahoma, Colorado and California.

The Grand Canyon State was added to this list thanks to Ms Patty Cake, who broke sharply from post number five before outdueling Senor Frogs to the wire. The filly by Texas Icon was picking up her second victory in five career starts after winning for the first time in the trials to the Wild West. 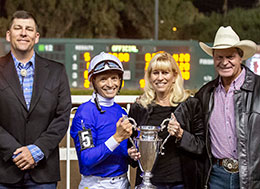 "Thank you to the connections," Bourdieu said. "She's a great filly and I couldn't ask for better. This is after 11 months of my injury. This is my third Quarter Horse ride (since returning), so it's special. More than anything I love to be back at Los Al. A lot of memories here. It was very close at the end, but she was gaining. She never gave up. She's one of those that likes to run, likes to win races. She's matured a lot and has come a long way." 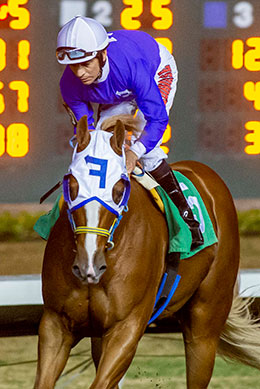 Wild West Futurity winner Ms Patty Cake returns under jockey Jorge Bourdieu at Los Alamitos Race Course.
© Scott Martinez
In the early part of the 2000s, Bourdieu was a leading rider at Los Alamitos, successfully piloting Thoroughbreds, Arabians and his share of Quarter Horses as well. Prior to his injury, Bourdieu piloted the Fales' Mickey Ward to a victory here in 2018 Grade 1 AQHA Cox Ranch Distance Challenge at 870 yards.

"It was a good comeback for our rider Martin Bourdieu," Ralph Fales said.

"He's special to us," Carolyn said. "Whenever we've called him, he's always been there for us."

Ms Patty Cake covered the 350 yards in :17.623. She earned $49,203 for the win to take her career earnings to $61,060. In addition to breeding Ms Patty Cake, the Fales were also the breeders of Old School Icon and Fashin Icon, who ran fifth and seventh in the Wild West.

"All these horses that ran tonight were born at Fales Ranch," Ralph added. "We were hoping for a trifecta, but didn't quite get there tonight. Hopefully we'll be back here next year with more than one of them. Thank goodness for Doc Allred and clean racing. That's part of the reason why we love running here."

"We appreciate everything Los Alamitos does and Doc does to keep the Intermountain horses (running) and winning," Carolyn added. "It's a lot of fun."