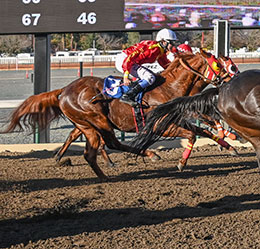 One Flyin Foose Gets Third Straight Win In Baxter Andruss Oregon Bred Futurity
GRANTS PASS, ORNOVEMBER 3, 2019Coming off a win in the $34,150 Far West Futurity at Los Alamitos Race Course October 13, One Flyin Foose got up the wire on Sunday to defeat One Famous Disco Man by a nose in the $24,350 Baxter Andruss Oregon Bred Futurity at Grants Pass Downs.

Ridden by jockey Jaime Lopez, One Flyin Foose rallied while completing the 400 yards in :20.069 seconds, equaling a 107 speed index into a 2 mph crosswind. It was the sixth win in nine starts this season for the daughter of champion Foose and the $9,700 winner's purse boosted her bankroll to $37,053.

Freddy Ibarra trains the bay filly for owner-breeder Matt Huse. The Oregon-bred, out of One Famous Strawfly by One Famous Eagle, also won the Prineville Quarter Horse Futurity this year.

One Famous Disco Man, a sorrel colt by One Famous Man, was caught at the wire and earned $4,880 for second. Adrian Quinones conditions the colt for owner Juan Gabriel Romero Lopez. Shannon Renee Akerstrom bred One Famous Disco from the Jerrys Disco Moon mare Disco Arboleta 37.

Cr Smokin Ocean, a son of champion Ocean Runway, finished three-quarters back in third-place for owner-breeder Randy Dickerson and trainer Nick Lowe. Kassie Guglielmino rode the gray gelding out of Im Special Star by Strawfly Special. He earned $3,900 for the effort.

Completing the official order of finish were Hold On Im Gone, Royal Pay Bac and Fast Movin Freight who was DQ's from fourth and placed last for interference. Royal Pay Bac lost his rider.

Races will be held every Sunday and Monday through Nov. 4, with 14 race days scheduled in total for the meet and all post times at 1 p.m. Admission is $4, and parking is free.