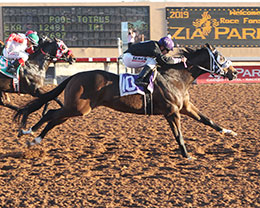 Off as the post-time favorite, Ryansmanonthemoon complted the 440 yards in :21.409 seconds, equaling a 104 speed index. Making his first start since winning a trial to the All American Derby but failing to qualify the son of leading sire First Moonflash got his seventh career win. The $115,200 winner's purse boosted his bankroll to $337,381.

It was the second graded win on card for trainer Cynthia Gonzalez and owners Jimmy Negrete and Jimmy Vazquez. Earlier in the day the trio with jockey Salcedo won the $145,000 New Mexico QH Fillies and Mares Championship(RG1) with Cats Daddys Lil Girl.

A New Mexico homebred for Negrete and Vazquez, Ryansmanonthemoon is a half-brother to Cats Daddys Lil Girl. Out of the Ma On The Move mare Girlonthego, the bay gelding kicked off his 2019 campaign with back-to-back wins in the Shue Fly Stakes(RG2) and NMHBA Stakes(RG2) at Sunland Park. He was also a second in the Zia Handicap at Ruidoso Downs.

The son of champion sire Valiant Hero won the Ruidoso Derby Challenge and a finalist in the Grade 1 All American Derby in 2019.

The highly touted Danjer finished a neck back for owners Billy Smith, Dean Frey and Downtime Enterprises LLC. Dean Rey is the breeder and trainer of the multiple stakes winner son of world champion sire FDD Dynasty from the Take Off Jess mare Shez Jess Toxic.

Winner of the First Down Dash Stakes and second in the Grade 1 Ruidoso Derby this season, Danjer had earned $456,711. He also won the All American Juvenile Invitational and was third in the Grade 1 Texas Classic Futurity at 2.