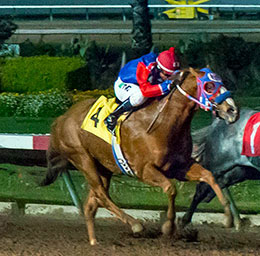 Sent off at 12-1 odds, Bos Time Machine led from start to finish, but needed to be at his very best in the final yards in order to hold off the fast charging Corona Jumpim MRL. Ridden by Carlos Huerta for trainer Paul Jones, Bos Time Machine covered the 400 yards in :19.775 on the way to scoring his first ever graded stakes win. 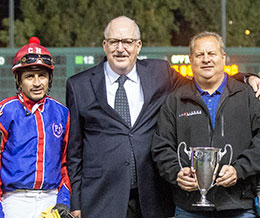 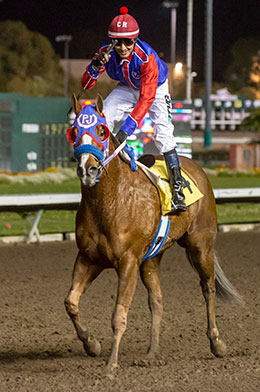 "He kind of got an awkward break," Jones said. "He kind of hopped out of there. He kind of beat the gate, but he hopped. He came down running. I'm really proud of him. It was getting a little scare. I thought the gray horse (Corona Jumpim MRL) had him beat a little ways. I was hollering at him to get by the gray horse and then I started seeing Powerful Favorite coming on the outside. It got a little scary there for a minute. I noticed at the wire that he held on. It was a happy moment."

Bos Time Machine has now won seven of 17 career starts and he's now earned $128,008, with $67,011 of that amount coming in this race. He had previously won the Catchmeinyourdreams Handicap and the Sgt Pepper Feature Handicap here last year for the Hoovestals of Helena, Montana.

"Gary is a super nice guy and he loves the horses," Jones said. "It's too bad he "wasn't here tonight for this win, but I'm sure he was watching and I'm sure he's happy."

For Jones, the victory represented his 231st graded stakes win and his 422nd stakes victory of his career. He's won 4,353 Quarter Horse races and he's saddled the earners of more than $87 million. Jones called his 2019 season not one of his best, but qualifying a horse into the Champion of Champions so early in the year could signal the beginning of a nice 2020 season for the trainer.

Breeder Peggy Brown with Brad McKinzie Winter Championship(G1) winner Bos Time Machine.
© Scott Martinez
"I really love it," said Jones of his sixth Winter Championship win. "In this sport, it's 'What have you done lately?' We had kind of a down year last year so hopefully this is an indication that we'll have good year. I had two really nice horses in the race. I thought Jess Macho Corona had a pretty good chance to win this race as well. Bos Time Machine won a couple of stakes races last year and when he runs his race he can be tough. He had a good clean path and an open path to run tonight."

With a Champion of Champions berth in his pocket, Bos Time Machine will likely have a few months off before returning for the Grade 1 Go Man Go Handicap on August 30. "I've learned that if you win the Winter Championship and earn the Champion of Champions berth, you want to give the horse some time off," Jones said. "Hopefully he returns with a strong second half of the year."

The Brad McKinzie Winter Championship(G1) winner's circle Sunday night at Los Alamitos Race Course. © Scott Martinez
Winning rider Carlos Huerta will now dream of another Champion of Champions victory. He won the prestigious race back in 2017 when he piloted Mr PYC To You to the biggest upset in Champion of Champions history at odds of 60-1.

"He was ready to go in the gates," Huerta said of Bos Time Machine. "He got a fast start and I felt that he could finish strongly. We got lucky tonight. You have to take advantage of these type of opportunities. I'm thrilled to have qualified a horse in the Champion of Champions so early in the year. I've grown to really love this horse. He's really gentle and friendly, but a monster on the racetrack."

Haras Portofino's Corona Jumpim MRL, the 2018 AQHA South American champion, earned $27,124 for finishing second from post number one. Ridden by Jose Nicasio for trainer Chris O'Dell, the son of Corona For Me entered this race after winning his Winter Championship trial. He's now won five of 15 starts and his earnings now stand at $156,713.