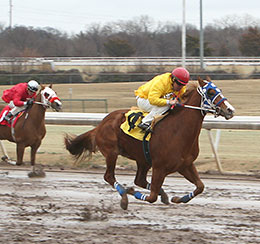 Remington Park Newcomer, Trainer Monty Arrossa, Wins Three Training Races With Only Three Starters
OKLAHOMA CITY, OKFEBRUARY 12, 2020Trainer Monty Arrossa has risen from small-town obscurity to the top ranks among American Quarter Horse conditioners in the country since 1991. He is racing at Remington Park for the first time and won three training races Wednesday despite only having a string of 12 horses on the grounds.

Remington Park conducted 10 training races Wednesday, in misty conditions with temperatures in the high 30s over a sloppy track.

Arrossa, 47, from Jerome, Idaho, won the first race of the day with If Im Lying Im Dyin, the fourth race with Aint She Tempting, and the seventh with Cartels Dynasty, all 2-year-old Quarter Horses. It was the only three horses he started in the schooling races and all three are owned by Dunn Ranch in Wynnewood, Okla. 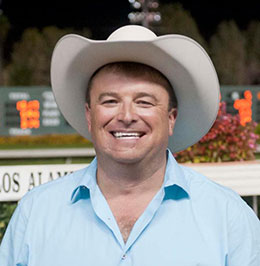 Trainer Monty Arrossa saddled three winners for owner Dunn Ranch on Wednesday's training card at Remington Park.
© Scott Martinez
"The Dunns sent us some horses to run in California and wed always thought about trying Remington Park, so we decided to come in this year," Arrossa said.

Arrossa went to high school at Shoshone, Idaho, where he graduated in a class of 19 students. That hasnt kept him from becoming successful in the big time, however, as he has had two Grade 1 stakes winners in his career, including the winner of the 2016 Champion of Champions at Los Alamitos in California with Zoomin for Spuds, arguably the top race for older horses in the country.

Arrossa ranked third in the country in number of wins in 2018 and was ninth last year. He also had a Grade 1 winner in Katies Easy Moves in the Vessels Maturity at Los Alamitos in 2018. Last year, Arrossa started 334 horses, won 63 times, finished second 66 times and third 53 more times. His horses earned $1,109,943. It was the second year in a row his starters have pocketed more than $1 million, a far cry from $14,937 in earnings when he started in 1991.

FDD Dynasty was the only stallion with multiple winners on Wednesday's card.

The training races originally scheduled for Thursday have been postponed to Friday at 11 a.m. due to a better weather situation predicted for the end of the week (see related story).

The 2019 Remington Park Quarter Horse season begins Friday, March 6, and continues for 50 dates, through Saturday, May 30.

Tracked by more than 161,000 fans on Facebook and more than 10,100 Twitter followers, Remington Park has provided more than $240 Million to the State of Oklahoma general education fund since the opening of the casino in 2005. Located at the junction of Interstates 35 & 44, in the heart of the Oklahoma City Adventure District, Remington Park will host the 2020 American Quarter Horse, Paint and Appaloosa Season from March 6 through May 30. For more information, reservations and group bookings please call 405-424-1000, 866-456-9880 or visit remingtonpark.com.