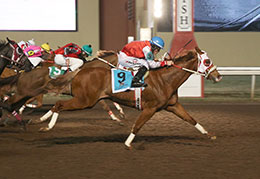 Jockey Jimmy Brooks Rides Love Is Everything V For His Third Win In The Oklahoma Derby
OKLAHOMA CITY, OKMARCH 21, 2020Jockey Jimmy Brooks wasn't surprised that he could win the Grade 3, $232,600 Oklahoma Derby aboard Love Is Everything V against such a stout field. After all, his winner Saturday night at Remington Park is the son of another horse that Brooks rode to this win.

Love Is Everything V is sired by second-crop sire One Valiant Hero, a previous winner of this race in 2014. On the bottom side, he is out of the One Famous Eagle mare Echoes of Love. Like father, like son. Among the runners he beat Saturday night was last year's Grade 1 Heritage Place Futurity winner Uptowne Babe.

"No, I wasn't surprised," Brooks said. "This is a nice colt. He qualified for the Rainbow Futurity finals last year at Ruidoso Downs and was neck and neck with the winner Uncle D but came up with a quarter crack in the final 200 yards and faded. I think he could have won."

Uncle D went on to be named the American Quarter Horse Association Champion 2-year-old for 2019.

Brooks gunned Love Is Everything V out of the gate on top when the race started and never looked back, winning by a half-length at 7-2 odds. James Sills of Cedar Hill, Texas, owns this 3-year-old gelding and Eddie Willis trains him. Willis is a 10-time training champion at Remington Park.

"In the trials for this Oklahoma Derby he just didn't break well," said Brooks.

Brooks' other two wins in the Oklahoma Derby came with One Valiant Hero and then again back in 2011 with Freighttrain B. Both of those wins also came for Willis.

This was Sills' first solo win in the Derby, although he had won with co-owner Gerald Swindell with Freighttrain B.

Willis' three wins is tops in the category of most victories by a trainer in this derby. Brooks also moved into the lead with most wins by a rider in this race since it has been hosted at Remington Park.

Love Is Everything V earned $93,040 for his owner, almost doubling his lifetime bankroll which now stands at $193,430. He has won four races lifetime in 11 tries and run second three more times and a third.

Love Is Everything V was bred in Oklahoma by Valeriano Racing Stables. Aint Working, the 8-5 betting favorite, finished second, a neck behind, and Astranomical finished third, another half-length back.

Fmm Rocking Cartel and Ivory Turbo finished in a dead-heat for fourth. Uptowne Babe, Sir Runaway Eye, Ritas Back On Track and Gonnawannakissthis completed the field. Fantsy First Down was scratched at the gate.