Home > Racing>Led By Tell Cartel, It's An El Primero Trifecta For Wells And Fales 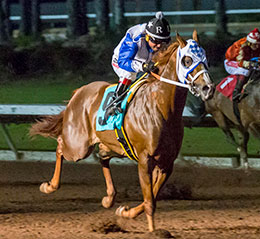 Led By Tell Cartel, It's An El Primero Trifecta For Wells And Fales
LOS ALAMITOS, CAMARCH 29, 2020, 2020Owner Mimi Wells and trainer Matt Fales swept the top three spots in the Grade 3, $213,300 El Primero Del Año Derby with 2-1 favorite Tell Cartel scoring a daylight victory with stablemate Old School Icon running second at 26-1 odds and Fire By Night, the longest shot on the board at 40-1, running with the leaders right from the start while finishing third on Sunday at Los Alamitos.

Tell Cartel broke sharply from the outside post nine and was second behind early leader Flokie about 100 yards after the race. With Ruben Lozano aboard, Tell Cartel moved ahead of the field in the later stages of the race, powering his way to a 1-¾ length victory in the 400-yard race.

The colt by Favorite Cartel covered the distance in an impressive :19.473, which is the second fastest time ever in the 48-year history of the El Primero. The stakes record of :19.39 was set by PK Fire in 2011. 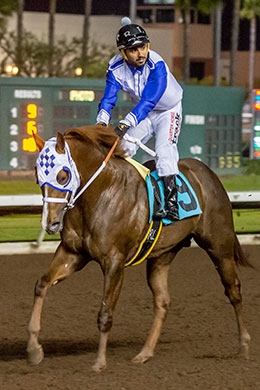 Tell Cartel, under jockey Ruben Lozano, returns after winning the Grade 3 El Primero Del Ano Derby Sunday night at Los Alamitos Race Course. © Scott Martinez
"He floated over that track tonight," Fales said. "It's amazing that I have a superstar on my hands. I want to embrace every moment of it. Ruben Lozano is the most patient rider. With a horse like this, even if he's beat in the first 100 or 200 yards, he stays patient and rides the horse with a ton of confidence. He knew he was going to get there."

Lozano guided Tell Cartel to an impressive come-from-behind victory in the Grade 1 Los Alamitos Winter Derby earlier this year. The homebred runner as sixth at the start of the Winter Derby before flying to ¾ length victory under hand urging from Lozano. Tell Cartel has now won three races in a row and six of 13 in his career.

"We'll enjoy this victory and see how he comes back," Fales added. "We'll make plans from there." Tell Cartel earned $89,586 for the win to take his career earnings to $252,902. The chestnut colt is eligible to compete in the trials to the Governor's Cup Derby, Golden State Derby, Los Alamitos Super Derby and Southern California Derby. And with the way he has finished in his last three starts at 400 yards, he should be considered among the most likely horses to shine at 440 yards later in the year or later in his career. 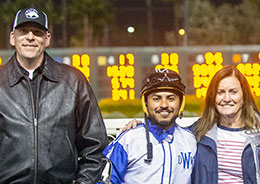 Ridden by Vinnie Bednar, Old School Icon moved up from sixth to second in this race to earn $36,261 for his runner-up effort. The son of Texas Icon is out of the Walk Thru Fire mare Cozie Fire.

Juan Pablo Leon was aboard Fire By Night, who earned $25,596 for running third. Fire By Night is a Walk Thru Fire half-brother to winner Tell Cartel from Chicks Tell.

Diamond Rock finished fourth and was followed in the official order of finish by Mister Tornado, You Can Run, Corona Required, Sass Go Blue and Flokie. Sass Go Blue was disqualified from fifth placed and placed eighth after interfering with You Can Run and Corona Required at the start. Flokie was pulled up late in the race and was vanned off.