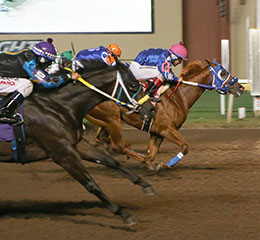 High Rate of Return won the $1 million-plus ($1,029,950) Heritage Place Futurity and has served as a solid stallion for much of the last decade. This 2-year-old colt, out of the Kelly Kip (TB) mare Kips Little Clique, showed some of that ability Sunday in winning against stakes-placed horses this meet at Remington.

Jockey Daniel Torres got this colt to the wire first in the $13,600 allowance race at 330 yards. High Value of Return was facing Seven Tales, Ur El Modelo, Buford T and Ferarri B, all of whom had run second, third or fourth in stakes races this year. The best High Value of Return had done in stakes-company this season was run eighth, soundly beaten in the $100,000 Remington Juvenile on April 18.

High Value of Return, trained by Jonathan Chavira, entered the race with his maiden win, which came in a Remington Park Futurity trial on April third. He didnt qualify for the final and then ran poorly in the Juvenile.

He showed his best side Sunday with the high-paying score. The winning colt broke second from the gate and would not be denied at the wire, winning by a neck over Ferarri B (5-1). Ferarri B had just barely missed winning the $48,500 Laico Bird Stakes on April 18, losing by a head to Best of You.

Seven Tales, the fourth-place finisher in the $383,725 Oklahoma Futurity on March 21, was sent off as the 5-2 betting favorite in Sundays feature, but could only manage a seventh-place finish.

High Value of Return is owned and was bred in Oklahoma by Mark McPhail of Snyder, Okla.

Coronados Lady (7-1) got up for third, just a nose back of the runner-up, Ferarri B.

Remington Park racing resumes with a special five-night week of action from May 21-25, wrapping up the night of Memorial Day. A trio of stakes races headline the week, all on the Memorial Day card with the $50,000 FL Lady Bug Stakes, the $50,000 Boyd Morris Memorial and the $45,000 Jack Brooks Stakes. The first race every night during the holiday weekend is at 6pm-Central.