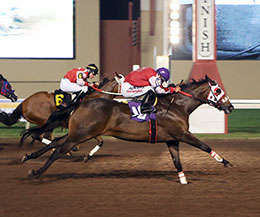 Going into the races of Saturday, May 16, she had uncharacteristically languished with a mark of only four wins this meet from 102 starts, for a mere four percent rate of winning. Her normal rate is somewhere around 20 percent.

Since Saturday, however, she has won six more times in her last 14 starters (43 percent). That red-hot blazing pace has moved her from oblivion in the standings, a tie for 25th, to ninth with 10 wins from 116 starts.

On Thursday night, Charette-Hill won three races, matching her training triple on Saturday. Her winners Thursday were in the first race with Salvy Splash, in the fifth with CRM Merle Girl and in the ninth with Easy Wagon Tales. She won with High Six Jess, Break Away James, and PL Pearl Harbor in the third, fourth and 11th races on Saturday night.

If thats no enough, one of her horses, One Sweet Promise, ran second in the second race Thursday night.

Her barn on the backside can be seen from Tulsa as it is red-hot and continues to glow brightly, especially in comparison to her soft start.

Jockey Jorge Torres has been the beneficiary or part of the cause for her barn to heat up. He has been on five of those six winners for Charette-Hill. High Six Jess was the only one without his services, under jockey Ramiro Garcia, on Saturday.

Torres kept the streak going Thursday night aboard Salvy Splash, a 4-year-old gelded son of Feature Mr Bojangles, out of the Pyc Paint Your Wagon mare Murphie Brown. He broke third out of the gate for Torres and finally got his head up for the win against $5,000 claimers.

Torres got win number two Thursday aboard the Paint, CRM Merle Girl, who broke her maiden after two rough trips in her first two tries. She is a 2-year-old filly by CRM Livewire, out of the Pyc Paint Your Wagon mare Sen Tosa.

Charette-Hills third winner of the night was Easy Wagon Tales, a 3-year-old filly by second-crop sire Wagon Tales, out of the Stoli mare Easy Downhill. She won the $15,000 claimer for non-winners-of-two among 3-year-olds-and-older by a half-length.

Remington Park racing continues a special holiday week of activity, Friday through Memorial Day Monday, May 22-25. The first race nightly, through the holiday, is at 6pm-Central.