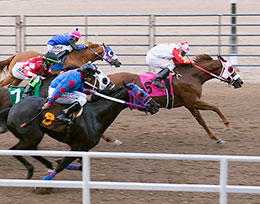 Game Stealer ($8.00) and jockey Eric Ayala covered the 300-yard distance in 15.660 and earned a 94 speed index in the gate-to-wire win for trainer Monty Arrossa and owner Five Livestock Company LLC. He won his trial on June 10 as the second fastest qualifier.

Game Stealer is a 3-year-old gelding out of Hot to Hit, by Walk Thru Fire. He was bred in California by Ed Allred. Game Stealer debuted at Los Al as a 2-year-old but has been competing in Utah as a 3-year-old prior to the trial for Wednesdays Maiden Frolic. He is now three for eight lifetime with $14,239 in career earnings.

Second place finisher Tricky Dasher was also second to Game Stealer in their trial, where she became the fifth fastest qualifier. Never Marin had the call in the final for trainer Kyle Dahlke and owners J.P. Sample and Lonna Gerstner.

Tricky Dasher was bred in Idaho by John Firth, by Favorite Cartel and out of the Walk Thru Fire mare Laters Baby. She has never finished worse than fourth in her six career lifetime starts, Wednesday was her first appearance in a stakes race.

Third place finisher Harems Runaway made up ground to get up for third under jockey Nakia Ramirez. Trained by Jay Pitcher, Harems Runaway was third in his trial and was the fourth fastest overall qualifier.

Harems Runaway is owned and bred in Utah by George and Judy Weldon, by Harems Last Dash and out of the Hawkinson mare Shes Fabolous. Prior to his trial, the 3-year-old gelding was second in the Jake Kapp Maiden Frolic at Weber Downs in May.