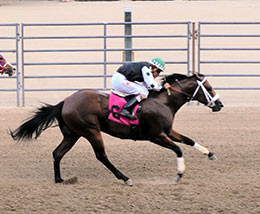 POCATELLO, IDJULY 31, 2020Trumpster turned the tables to defeat Furry Look in the $15,000 Pocatello Downs Non-Winners of Two Stakes (not black-type) on Friday evening.

Trumpster ($10.80) finished second in his trial from June 24 behind Furry Look, who returned to run second in the final. He was the fifth fastest qualifier.

Ridden by Jesus Canales, Trumpster broke on top and finished the 350-yard event in 17.673 to earn a 94 speed index in the wire-to-wire win. The One Dashing Eagle colt broke his maiden at Los Alamitos in November and qualified to the Adequan Weber Downs Derby Challenge in May.

Trumpster is trained by Mark Hanson for owner Byron Goody. He was bred by Dennie and Kris Hill in Idaho, out of the 2002 All American Futurity (G1) winner Ab What a Runner, by Royal Quick Dash.

Fourth fastest qualifier Furry Look was the post-time favorite but could not catch the winner. The Furyofthewind filly was ridden by Jesus Virgen for trainer Ricardo Castillo and owner Adrian Aleman.

Furry Look was bred in Utah by Carolyn and Jose Adrian Aleman, out of Righteous Look, by Righteous Brother. Prior to her trial victory, she won a consolation race for the Maiden Frolic at Pocatello in June. She qualified for the 2019 Beehive Futurity and ran in the KVN Corona Derby earlier this year at Weber.

Jills Mountain and Cesar Moreno stayed up for third for trainer Adrian Zavala and owner Miguel Zavala. The Jr Dynasty Mountain filly was bred in Utah by Kent Arbuckle, out of Kr Streakin Jill, by Dash Ta Fame.

Jills Mountain was the tenth fastest qualifier to Fridays final after finishing fifth in the same trial as Trumpster and Furry Look. She broke her maiden at Pocatello earlier this year.

Completing the field were Your Pace Or Mine, Sister Carol, Crown Apple, Df Mr Corona and Hocks Fast Wagon. Curls Are Kool was scratched.