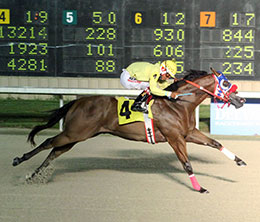 Under jockey Rolando Cabrera, Ought To Go Tee covered the 350 yards in :17.315 seconds, equaling a 98 speed index over the "fast" racing surface. The son of multiple stake sire Tee Cos entered the trials off a close effort in the $357,981 Laddie Futurity(RG2) in his last start July 4th.

Trainer Fernando Lopez saddled the bay gelding to his second win in three starts for owner Jose Oviedo. Bred by Ronald Gale, from the Bigtime Favorite mare Vf Ought To Go Max, Ought To Go Tee broke his maiden in the Laddie Futurity trials when he posted the second fastest qualifying time. He has earned $74,056 this season.

Trainer Wendy Garcia saddled Denalia Sweet Jess to a half-length win as the post-time favorite in the third trial to get the third fastest time of :17.546 seconds, a 94 speed index. Modesto Pena rode the son of One Sweet Jess for owner Jose Rodriguez.

Russel Moward bred the $9,000 LQHBA Yearling Sale graduate from the Chicks Beduino mare Denali Chick. With two wins in four starts under his belt the gray colt was third in the Mardi Gras Futurity(RG2) in March and has banked $44,317.

The afore mentioned Hallelujah Song finished second in the fourth trial to get the fourth fastest time of :17.375 seconds, a 93 speed index. Katie Carlos trains the $13,000 LQHBA Yearling repurchase for owner Jesus Salazar.

The final qualifying spot on Friday went to San Lorenzo Flash, a son of champion sire Carters Cartel, racing for owner Rogelio Marquez, Jr. A $18,000 LQHBA Yearling repurchase (sold in the name Dashin C C) finished second to Denalia Sweet Jess in his career debut to get the fifth fastest time of :17.546 seconds, a 92 speed index.

The second five fastest qualifiers on night-one are preferred invites for the $75,000-Guarnteed Louisiana Juvenile which will also be held August 22nd. CLICK HERE for that list.

Delta Downs will host another 10 trials on Saturday, for this years $1,025,782 Lee Berwick Futurity (RG1). Finals of each race will take place on closing night, August 22.

For more information about the season visit the tracks website at www.deltadownsracing.com.

For more information about the season visit the tracks website at deltadownsracing.com.