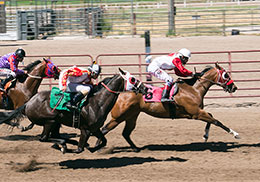 Pattys Saint ($3.80) was the fastest qualifier from three trials on August 1. She bested her own qualifying time in the final and crossed the wire in 15.480 in the 300-yard final to earn an 89 speed index.

Pattys Saint is trained by Heath Hillman for owner and breeder Robert Harrison. She was bred in Idaho, by Jess Got Easier, out of Sp Saint Patty, by Saint Shackleton.

Pattys Saint debuted at Pocatello in June, where she qualified for the Crush the Curve Futurity. She is undefeated in her two starts at Oneida and has earned $11,155 in her career to date. 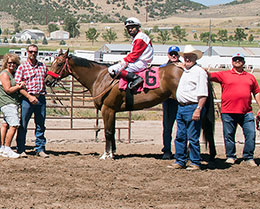 Threefamousdiamonds and Cordarelton Benn followed in second place for trainer Monty Arrossa. The Tres Seis Nueve gelding is owned by CG Racing LLC and Mark Curtis. He was bred in Idaho by Mark and Holly Curtis, out of the stakes winning mare Fames Version, by Winners Version.

Threefamousdiamonds broke his maiden when he won his trail for the Oneida County Futurity as the fifth fastest qualifier.

The highest price on the board and sixth fastest qualifier Zoommancoming completed the trifecta. Zoommancoming was second in the same trial as Threefamousdiamonds. Though still a maiden, the one Fabulous Eagle colt has finished in the money in four of his five career starts.

Zoommancoming was ridden by Raphael Romero for trainer Ricardo Castillo and owner Adrian Aleman. He was bred in Utah by Darling Farms, out of Stoli Your Corona, by Stoli.