The 10 fastest qualifiers, from two trial races, will return to Ajax Downs on Monday, September 28th to vie for the winners' share of $50,000-added purse going 400 yards.

Under jockey Tony Phillips, Eazy Street scored a one-length win over Marianita Csj to get the top qualifying mark of :20.426 seconds, into a 15 mph headwind. The son of multiple stakes sire Mighty B Valiant entered the trials off a third-place finish in the Ontario Bred Derby on September 2nd.

Trainer Bryn Robertson saddled the sorrel gelding to his sixth win in 10 starts for owners Carol and Jaime Robertson. Winner of both the Alex Picov Memorial Futurity and the Ontario Bred Futurity last year, he has earned $66,841. 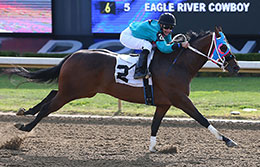 One Kool Dynasty, under jockey Helen Vanek, cruises to the second fastest time in the Picov Derby trials Monday afternoon at Ajax Downs.
© Clive Cohen / New Image Media
The royally-bred One Kool Dynasty got her fourth win of the year under jockey Helen Vanek in the opening trial, setting the second fastest clocking of :20.460 seconds. The daughter of world champion sire FDD Dynasty went wire-to-wire, defeating The Kingsmann by three-quarters.

Conditioned by Jason Pascoe, One Kool Dynasty entered the trials off a second-place effort in the Ontario Bred Derby. Belinda Taggart owns the bay filly out of One Kool Bud by Strawflyin Buds. Bred by William "Bill" Taggart, One Kook Dynasty has earned $47,697.

Racing continues next Monday Sept. 21. Ajax Downs continues to hold live racing behind closed doors due to the COIV-19 pandemic but all the races are live-streamed at ajaxdowns.com and fans can open an account to watch and wager on the afternoon at Horseplayer Interactive, hpibet.com.