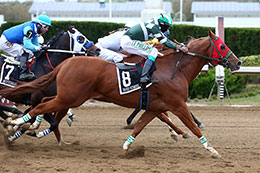 The 8-year-old son of Sugarman Perry completed the classic 440 yard distance in a quick :21.745 clocking to equal a 104 speed index with a 22 mph tailwind. It was the 20th career win for Fiesty Icon.

"I decided to enter him [in the Championship] after his last race, the Ontario Bred Maturity," said Kennedy, who raises and trains horses with wife Karen on his farm in Mount Albert, ON. "He was second that day but I liked the way he came out of that race. He usually tells me when he is ready to run; I guess he was right." 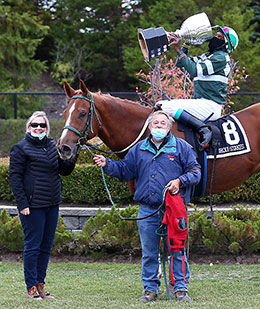 The winning connections of Fiesty Icon with the Alex Picov Memorial Championship stakes trophy Monday afternoon at Ajax Downs. © Clive Cohen / New Image Media
Kennedy purchased Fiesty Icon as a yearling from the Picov family and the gelding has had an illustrious career. In fact, Fiesty Icon was the Ajax Downs' Horse of the Year as a 3-year-old in 2015 and in recent years had been ruling the Ontario Bred older horse ranks.

"He's a fabulous horse, he always goes out and gives us his all when he runs," said Kennedy. "After the race another owner, James Bogar, said to me, 'You must be on cloud nine'. I said it was 10."

Three-time Ajax Horse of the Year Country Boy 123 was looking to defend his Alex Picov Memorial Championship title for the fourth consecutive year for owner-trainer Ruth Barbour. The 27-time winner of $417,351 was ridden by jockey Ed Walton.

The son of champion Country Chicks Man as bred in Michigan by Carolyn Bay from the Dash Thru Traffic mare Very Dashin 123. He earned $8,851(US) for today's effort.

Milena Kwiecien's Spy For The Senate was moved to third after Countrys Comin Back was DQ'd and placed fourth for interference. Jason Pascoe saddled the 4-year-old son of Louisiana Senator from the Corona Cartel mare Corona Spy. Mary Hainline bred the bay colt in Oklahoma. Ridden by Ismael Mosqueira, Spy For The Senate earned $4,291(US) to bring his earnings total to $104,389.

There are two Mondays left on the 2020 Ajax Downs calendar and there are stakes races on both days. First race post time is 12:55 p.m. (EDT).

Ajax Downs continues to hold live racing behind closed doors due to the COIV-19 pandemic but all the races are live-streamed at ajaxdowns.com and fans can open an account to watch and wager on the afternoon at Horseplayer Interactive, hpibet.com.

The First Line Racing Syndicate, developed by the Quarter Racing Owners of Ontario, Inc. allows for new owners to affordably get involved in horse ownership. Contact them for opportunities for the 2021 racing season at qrooi.com.