Zoomin For Spuds, Apollitical Pence Earn Presumptive Berths To The Grade 1 Champion Of Champions
Zoomin For Spuds earns his fifth invitation to the Champion of Champions by winning the Z Wayne Griffin Directors Stakes Sunday at Los Alamitos. 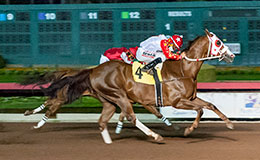 A total of two presumptive berths to the Champion of Champions were up for grabs in these trials with Dunn Ranch LLC and Valeriano Racing Stables LLC's Apollitical Pence finishing with the second fastest time after crossing the wire a half-length behind Zoomin For Spuds in their trial.

Ridden by Jose Nicasio, Zoomin For Spuds scored an impressive victory in the second of two Directors Trials on the way to covering the 400 yards in :19.515. The win earned him a presumptive berth to the $600,000 Champion of Champions to be held on Saturday, December 12.

"He's amazing," trainer Monty Arrossa said. "He's a gift from God  a blessing. He does everything we ask of him. I'm so blessed to have him. To be named with those other horses, they were the class of our industry, it's an honor."

Zoomin For Spuds improved his record to 16 wins in 46 starts and his earnings of $8,250 in this $15,000 race takes his career tally to $860,671. Los Alamitos categorizes each Z. Wayne Griffin Directors Trial as a stakes race, giving Zoomin For Spuds his 13th stakes victory at Los Alamitos.

The 7-year-old Idaho-bred gelding is now tied with Flight 109 for fifth place all-time in stakes wins at Los Alamitos. The only horses ahead of them are Charger Bar and Kaweah Bar with 18 stakes win each, Sign Of Lanty with 16, and Griswold with 14. The late Jim Walker of Bellevue, Idaho, bred Zoomin For Spuds. His Quarter Horse racing legacy has continued under the watch of his widow, JoAn Walker.

"The Walkers are just like family to me," Arrossa added. "Jim was like a second dad to me. JoAn has been there through my whole entire life. Jim would be so proud. He would be bragging right now. I'm just very thankful for JoAn and her grandson, Brad, for carrying on. This was Jim's dream and it took him forty years. He bragged about that all the time. It's coming to fruition now. I'm very happy for them. I'm very thankful."

After running seventh in last year's Champion of Champions, Zoomin For Spuds did not race during the first half of 2020. He returned to action with a third-place finish to Powerful Favorite in the Grade 1 Go Man Go Handicap on August 30. He then won the Catchmeinyourdreams Handicap b 1 ½ lengths on September 19 before running second by a nose to Chocolatito in the Grade 1 Robert Boniface Los Alamitos Invitational Championship.

"We operated on his throat at the end of last year," Arrossa said. "I took him one morning to pony him and he was struggling to breath. Dr. Ryan Carpenter of Santa Anita did the surgery on him. We didn't know if the surgery was going to work or not. We gave him some time after the surgery and he's responded great. He's pretty sharp right now. The Champion of Champions will be a great field of horses. It's a blessing and an honor just to be in there."

Dunn Ranch LLC and Valeriano Racing Stables LLC's Apollitical Pence, who finished second to Zoomin For Spuds in this trial, qualified to the Champion of Champions after posting the second time of :19.592. John Cooper saddled the Oklahoma-bred gelding by Apollitical Jess. 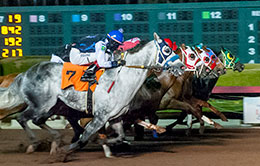 If any other presumptive berths open up in the weeks or days prior to the Champion of Champions, Ricardo Ramirez's Eagle Coast would be next in line after running third to Zoomin For Spuds in this trial and finishing with the third fastest qualifying time of :19.882.

Mauricio and Miguel Gallardo's Hotsempting, one of the top 3-year-old fillies in the nation, finished fourth in this trial and would be fourth in line in the event another spot opens. She covered the distance in a time of :19.906.

Haras Portofino's Corona Jumpim Mrl won the opening Directors Trials by a nose in one of the most hotly contested and evenly matched races of year. He finished with the fifth fastest qualifying time of :19.934.