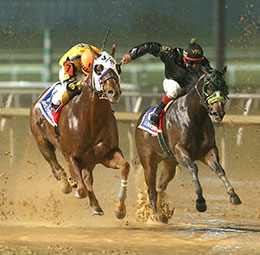 Racing for owner Stinebaugh Equine Enterprises, LLC and conditioned by longtime trainer John Stinebaugh, Perrys Double Down completed the 440 yards in :21.478, equaling a 98 speed index on the sloppy (sealed) racetrack.

"In the trial he (Perrys Double Down) got antsy, false broke and hit his knee, today I was just trying to keep him steady," Calderon said after the race. "We left there and 100 yards before the wire I knew we had it." 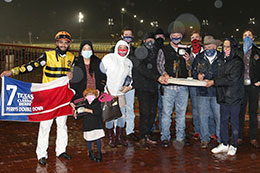 The winning connections of Perrys Double Down accept the Texas Classic Derby stakes trophy Saturday night at Lone Star Park. © Dustin Orona Photography
Bred by Bob and Jerry Gaston, from the Fishers Dash mare Double Down Darling, Perrys Double Down was a finalist in the Rainbow QH Derby(G1) and the All American Invitational Stakes at Ruidoso Downs over the summer.

Stinebaugh won the 2010 Grade 1 All American Derby and grade 1 Rainbow Derby with Double Down Special, a half-brother to the dam of Perrys Double Down. Bob and Jerry Gaston were also the breeders of the son of The Down Side who earned $1,211,934.

Wow What A Dynasty, Silk And Stilettos, Jess U R Blue, Jess Sumokin Hot, Avyator, Kj Frankie B and Kiss My Astica completed the field.