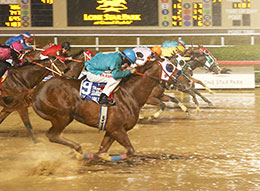 The Gaston's not only bred the winners of the Texas' richest race for the second time (they were the breeders of 2012 Texas Classic Futurity(G1) winner Valiant Lil Lady), they also bred Perrys Double Down who won the Grade 1 $393,210 Texas Classic Derby just one race earlier at Lone Star Park tonight.

Under champion jockey Rodrigo Vallejo, Dulce Sin Tacha lugged out from the nine post but prevailed while completing the 400 yards in :19.628 seconds, a 98 speed index on the sloppy (sealed) track into a 5 mph crosswind.

Getting his first win the Grade 1 Texas Classic Futurity, longtime trainer Heath Taylor saddled the son of champion and first-crop sire Jess Good Candy to his fifth win in six starts this season. 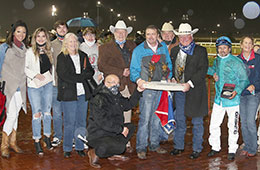 Texas Commissioner of Agriculture Sid Miller presents winning owner Bob Gaston the Texas Classic Futurity stakes trophy Saturday night at Lone Star Park.
© Dustin Orona Photography
"You have to have really, really good horses and you have to thank the Gaston's for sending me this horse," Taylor said after the win.

After breaking his maiden at Ruidoso in June, he won a trial for the Rainbow Futurity(G1) and All American Futurity(G1). He's only loss was a second-place effort in the $200,000 All American Juvenile on Labor Day.

"I told Mr. Gaston I didn't know if it would be tonight but at some point this horse would win a Grade 1 race," Taylor added.

After getting away slow under jockey James Flores, favorite Instygator rallied to finish second for the second consecutive time this season in a Grade 1 futurity final by less than a neck. Racing for owner Jose Guzman and trainer Santos Carrizales, Jr., the son of multiple stakes sire Ivory James boosted his earnings to nearly $806,000 after pocketing $226,866 for second.

Jess On The Run and Watch Him B Famous dead-heated for third, a head back in the blanket finish to earn $82,498 each.

Trainer Rolondo Almanza saddled Jess On The Run for owner Julian Gamez. Sam Green bred the son of Mr Jess Perry in Oklahoma from the FDD Dynasty mare Miss Southern DD. Ricardo Garza-Cruz had the riding call aboard the $104,498 earner.

Watch Him B Famous races for owner-breeder Pete Scarmardo and is trained by Leon Bard. Pedro Chavarria Espinosa rode the Texas-bred son of leading sire One Famous Eagle from the First Down Dash mare Lady Lilia. A brother to Sam Houston Futurity (G2) winner This Is An Eagle, Watch Him B Famous has earned $103,408 in seven starts this season.