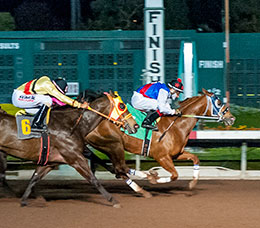 Kiss Thru Fire Makes It Back-To-Back Stakes Wins
LOS ALAMITOS, CAFEBRUARY 20, 2021Gentry Farms' Kiss Thru Fire has been red-hot over the past two months at Los Alamitos. The daughter of Walk Thru Fire has won three out of her last four starts including back-to-back graded stakes win at the Orange County oval.

Her most recent victory came in the Grade 3, $35,000 Denim N Diamonds Handicap on Saturday night at Los Alamitos. She had previously defeated nine talented mares to win the Grade 1 Charger Bar Handicap on January 3.

With Raul Valenzuela in the irons for trainer Juan Aleman, Kiss Thru Fire broke sharply from post number five, took the lead shortly after the start and was able to hold off the strong finishing Wambui by a half-length. Kiss Thru Fire came into this race after defeating nine talented mares to win the Grade 1 Charger Bar Handicap on January 3.

"This mare has figured it out of the gate," Aleman said. "Her issue was she wouldn't get out of the gate and then get in trouble. It would hinder her from finishing better than she has. Now she's got it. She has been breaking good every time in her last three starts. She's shown what she can do when she gets out of the gate."

Kiss Thru Fire began her current strong form with a gutsy, hard-fought win in the trials to the Grade 2 Southern California Derby on December 20. She followed that victory by finishing second to multiple derby winner Nomadic by a neck in the Southern California Derby final before pulling away in the second half of the race to win the Charger Bar. In the Denim N Diamonds, Kiss Thru Fire covered the 350 yards in :17.669.

Even prior to this streak of outstanding efforts, Kiss Thru Fire had shown that she was special. As a 2-year-old, she ran in the Grade 1 Ruidoso Futurity and finished fifth in both the Grade 1 Golden State Million Futurity and Los Alamitos Two Million Futurity. As a sophomore, she qualified to the Los Alamitos Oaks, finished second in the All American Oaks and returned here to qualify to the Los Alamitos Super Derby. Now a winner of seven of 19 starts, Kiss Thru Fire now has lifetime earnings of $457,503 after earning $19,250 for her Denim N Diamonds effort.

Kiss Thru Fire will now begin preparations for a trip to Remington Park instead of a visit to the breeding shed.

"Mr. Gentry decided to leave her here for this race and then to shoot for a big race in Oklahoma and then bring her back here to close out the meet in the big mare races (at Los Alamitos)," Aleman added. "She's going to keep running. If everything goes okay and things go as planned, she'll be back here for the Mildred Vessels (in September). That's what we're shooting for."

Ed Allred's Wambui, who came into this race after a pair of allowance wins, had another strong performance with this runner-up effort. The daughter of last year's leading sire sire of money earners' Favorite Cartel earned $7,875 to take her career earnings to $39,882. Oscar Andrade, Jr. piloted Wambui for trainer Scott Willoughby.

She was followed by All Prettied Up, Look Of Love MV, Fayvorite Chick, Tequila Sangria, Gray Invader and Royaltys Molly.