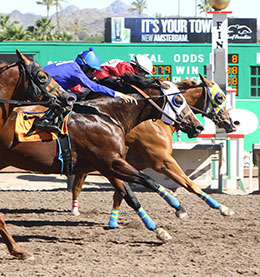 Fales kicked off the day with a win in the Distance Challenge race with Mickey Ward then he saddled Cowgirl N Up to victory in the John Deere Turf Paradise Juvenile in the fifth. With Jess A Cowboy's win in the sixth, the trainer has now booked three horses into the rich Bank of America Challenge Championships on October 14th at Prairie Meadows.

Ridden by jockey Vince Guerra, Jess A Cowboy was in tight early, after getting bumped at the start, before prevailing by a neck in the 440-yard race. The 5-year-old son of multiple stakes sire Dejon raced over the course in :21.678 seconds, a 101-speed index into a 6-mph headwind.

Jess A Cowboy is now eligible to race in the Grade 1 $330,000-Guranteed Bank of America Challenge Championship on October 14th. He winner of that race will earn an invite to the Grade 1 Champion of Champions at Los Alamitos Race Course.

Also, a multiple stakes winner, stablemate Heat Warning earned $12,096 for his second-place effort. Jorge Bourdieu rode the 6-year-old A Regal Choice homebred for owner/breeders Ralph and Carolyn Fales. He is out of the Dixieland Heat (TB) mare Its A Dry Heat (TB), Heat Warning. Saddled by Matthew Fales, he has earned $186,180.

Ebw Catalyst, May Be Fantastic Sa, Justified, Nucky, Quick Dynasty, Luv On The Run and Specials Gold completed the field.